If you find yourself in Times Square, at Barclay's Center, in the Oculus at Westfield World Trade Center, or standing in front of a LinkNYC kiosk this month, pay closer attention to the advertisements cycling on the screens in front of you. You just may catch some art.

Commercial Break is a citywide exhibition of digitally native artwork put on by the Public Art Fund to launch their 40th anniversary season. The exhibit features the work of twenty-three diverse global artists across all five boroughs of the city, making it the organization's largest group exhibit to date.

Drawing inspiration from the Public Art Fund's seminal exhibition Messages to the Public, which ran on the 800-square-foot animated Spectacolor light board in Times Square from 1982-1990, Commercial Break "is literally breaking the commercial, the advertising cycle on these platforms to run artwork," explains Public Art Fund Associate Curator Emma Enderby. "It very much references Messages to the Public, but it's also so topical, so of our time. Think of how dramatically things have changed [since the '80s], how much screens are an invasive part of our lives. They're on our streets, they're above us, they're in our public spheres and in our private [spheres]; we walk around with screens and advertisements in our pockets."

So how did the Public Art Fund go about choosing the artists they commissioned?

"It's a new generation in contrast to Messages to the Public," explains Public Art Fund Associate Curator Daniel S. Palmer. "The average age of the artists is thirty-two, thirty-three. It was [also] important for us to have a range, really a global diversity of voices.

"They really rose to the occasion. They made artwork that is not only very technologically advanced and at the fore of contemporary art, but incredibly poetic and powerful, and which really address a myriad of issues that are relevant to our time."

So is the exhibit itself meant to be expressly political?

"I think all of the artwork is political in the sense that for an artist to be working in a public [space] that's usually about consumption—that's already a statement," says Palmer. But he then points to particular pieces that take that idea a step further.

Take Hayal Pozanti's RELENTLESS TENDERNESS, the only work running at the Westfield World Trade Center. The political message in RELENTLESS TENDERNESS is quite subtle. Pozanti was on hand at the press event to describe her piece as we stood in front of the LED screen inside the Oculus, waiting for her work to come up in the cycle: "I'm interested in how we define ourselves as human in relationship to artificial intelligence," she said. As a part of her work, Pozanti devised her own alphabet of abstract forms expressed in this digital image. The alphabet is then translated into English letters that spell out the words "Relentless Tenderness". This distinctively human message expresses the artist's plea for tolerance, understanding, and empathy in the world today.

Compare that with three of the videos running in Times Square. There's Martine Sym's disturbingly powerful video Lesson LXXV, which examines representations of blackness and its relationship to American situational comedy. Or Mary Reid Kelley and Patrick Kelley's Crete Meat, a black and white video that explores the condition of women throughout history. And then there's Sue De Beer's If They Come in the Morning, a series of three videos. "She had a whole different concept," explains Palmer. "And then when the election happened, she was like, 'You know what? I'm going to rework it.' She wanted to put a really strong female presence in Times Square." And so De Beer's work features two female urban skateboarders from the Bronx "Brujas" feminist skate crew who view their interventions into the city and urban street culture as a deeply political act. "One video finishes with [the message] 'Don't Mourn, Organize,' and [another] has images of her personal political heroes."

Palmer also points to David Horvitz's For Kiyoko, From Amache, a still image showing on LinkNYC kiosks. "This is one of the most powerful pieces for me in terms of its poetry," he says. "It's an image of the night sky. [The text reads] 'I made you a photograph/ Of the stars seen from eastern Colorado one night last October. / From the site of Amache, the Japanese Internment Camp. / I imagine my grandmother looking at them from this same spot, / some 75 years ago." Here it's clear the political statements lean more towards the overt. 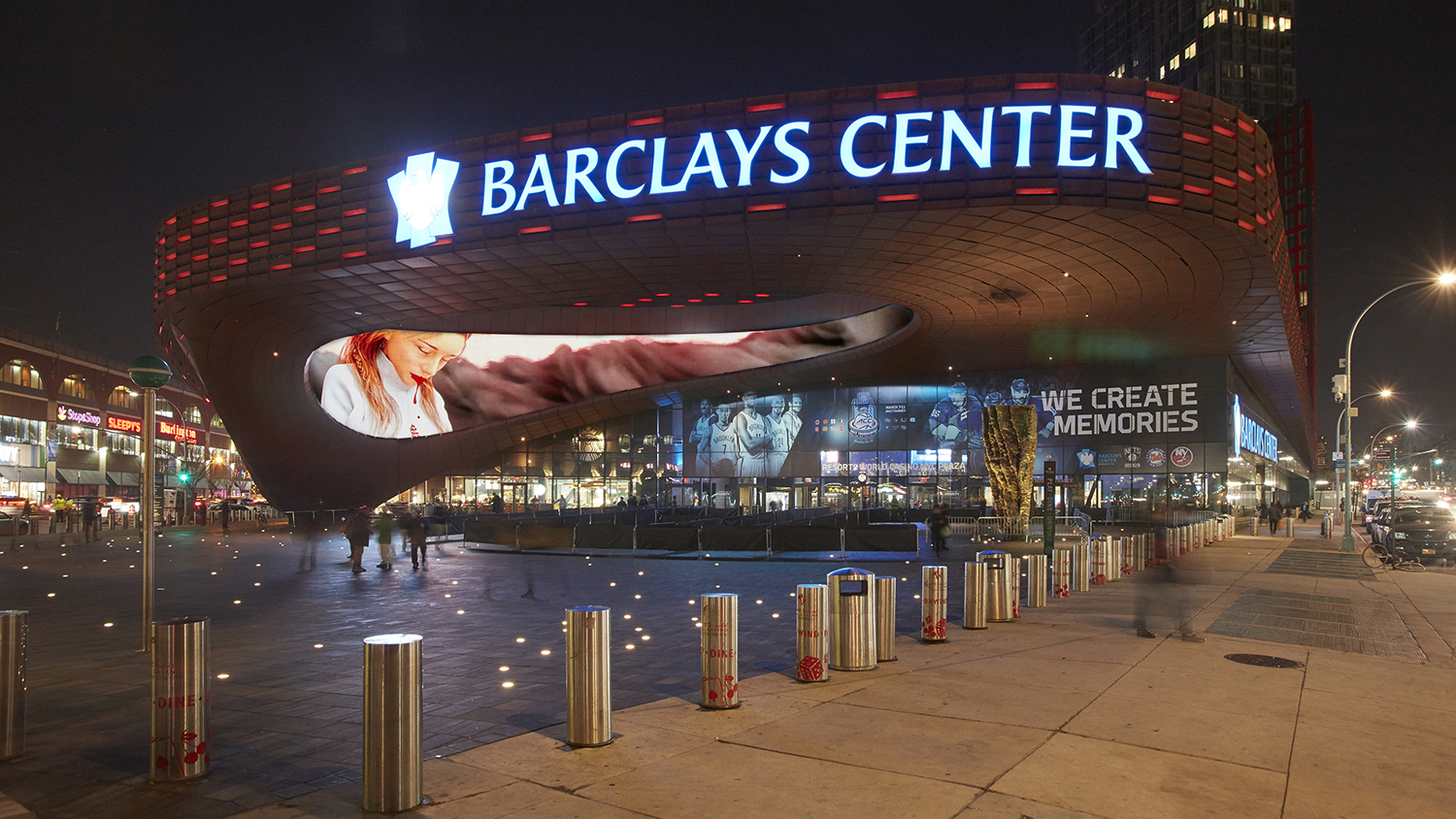 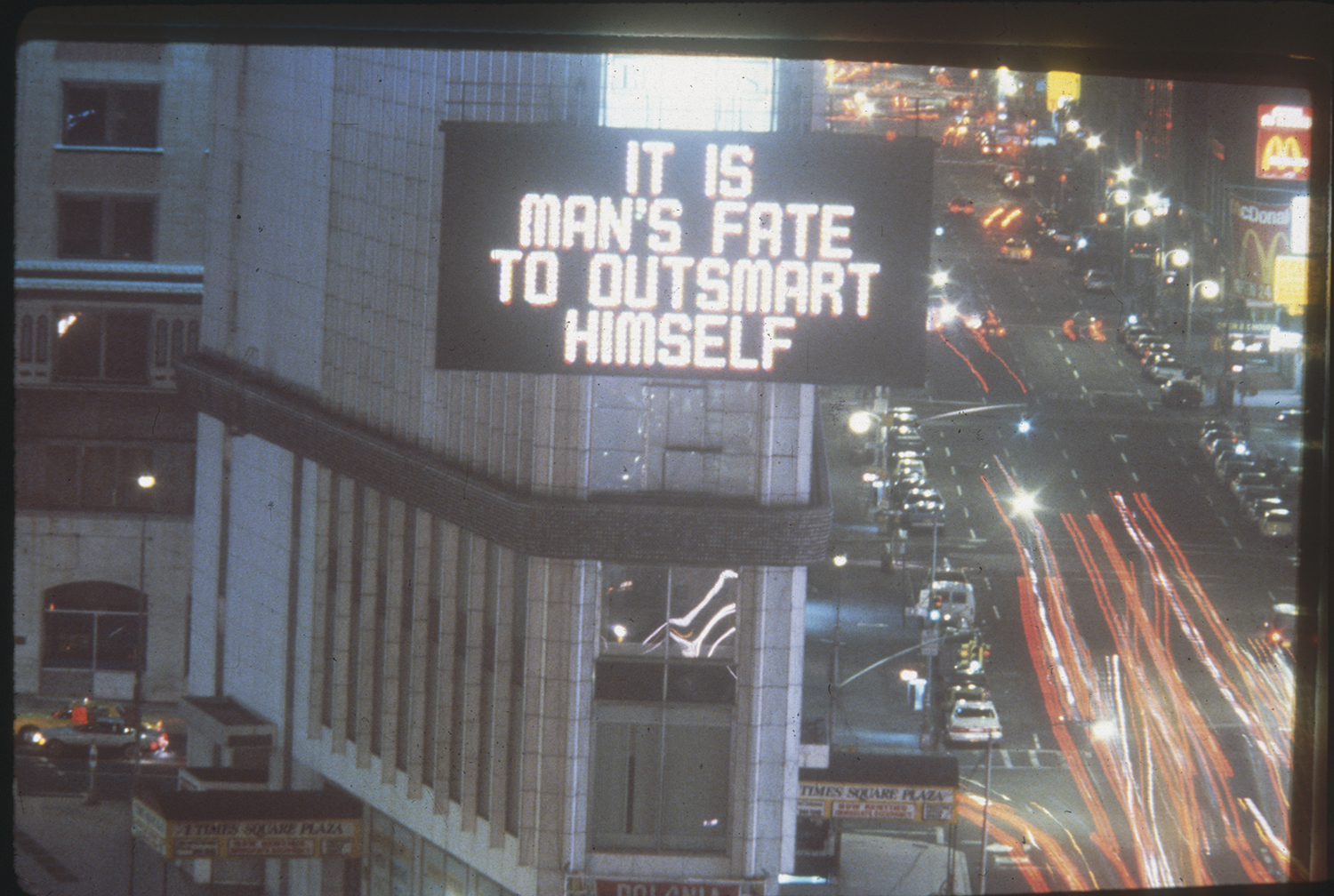 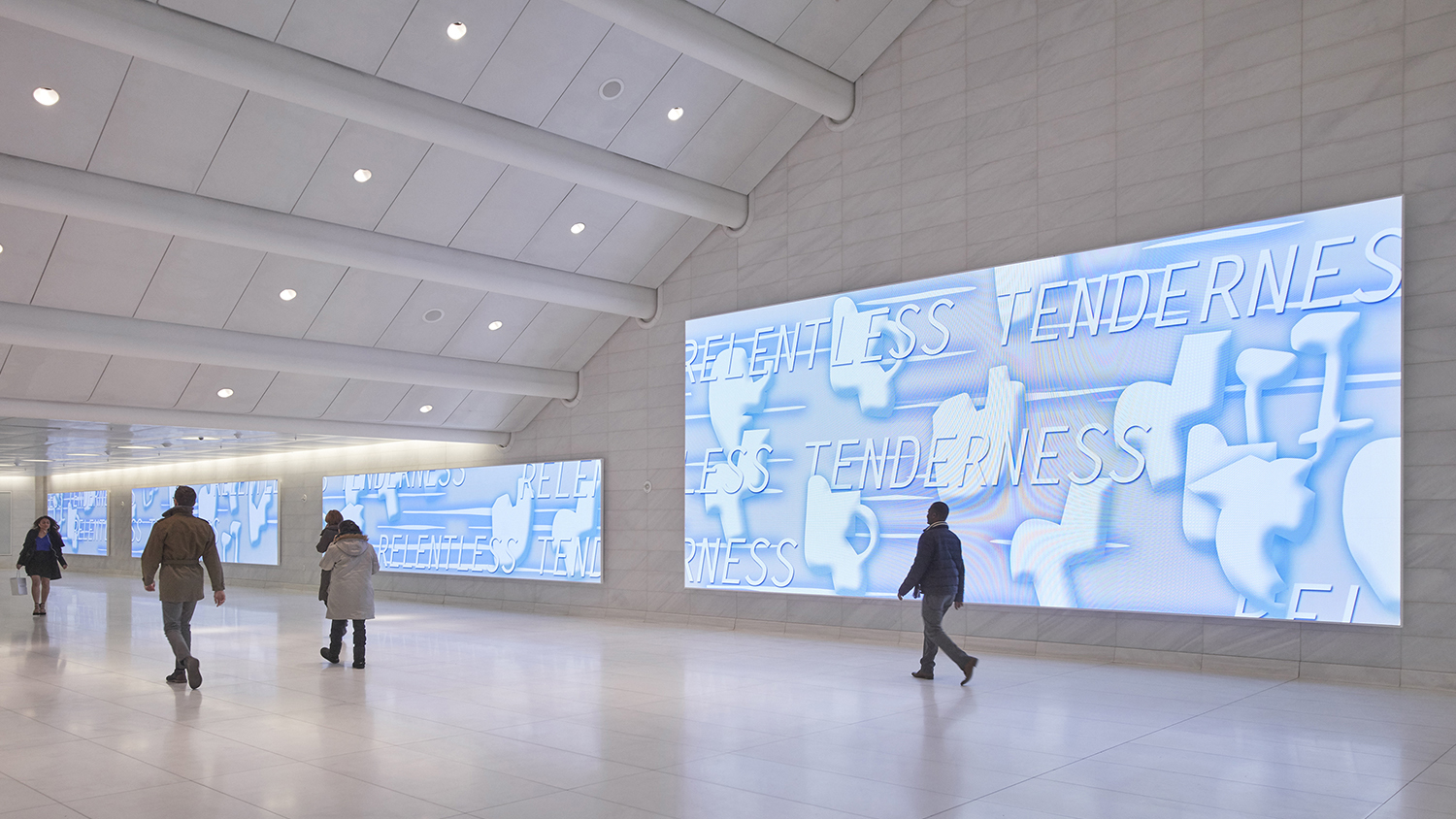 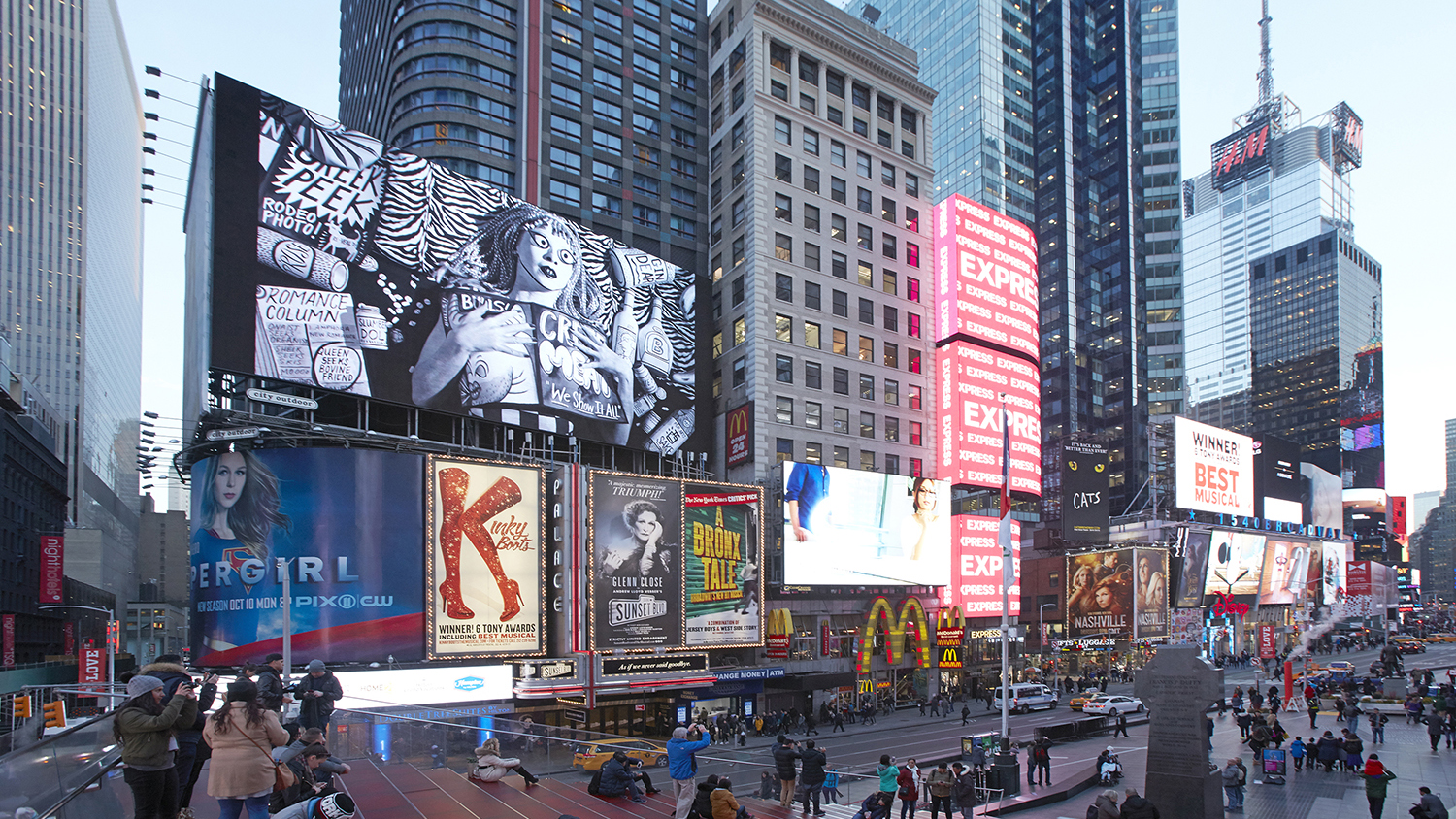 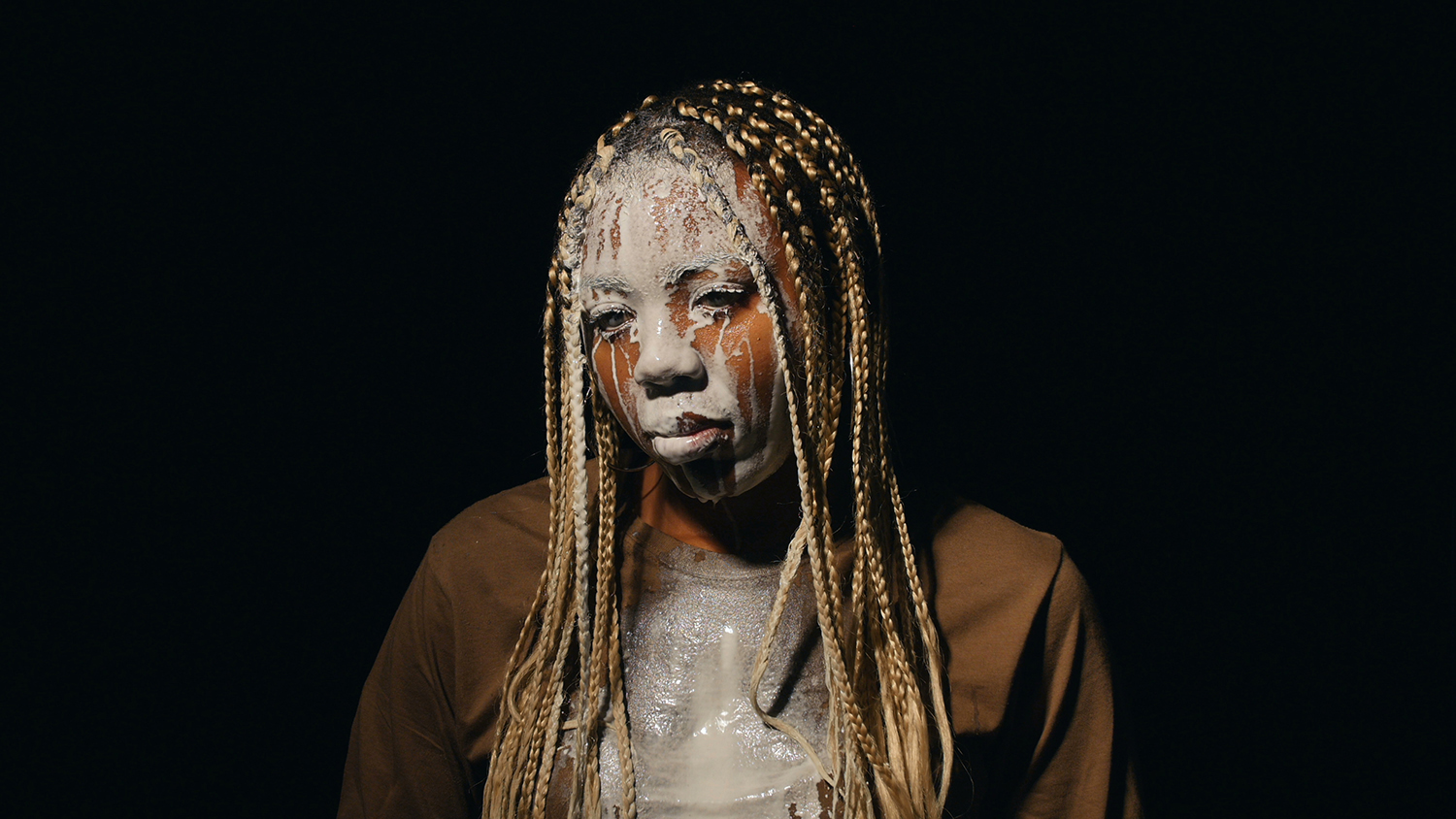