Artist Dario Calmese has achieved the pinnacle of success in multiple disciplines. He has directed Kirby Jean-Raymond's Pyer Moss fashion shows for the last six years, is a highly in demand photographer - being the first Black photographer to shoot a cover for Vanity Fair (of Viola Davis), and has also taught a course at Parsons School of Design titled "Decolonizing the Gaze: Fashion, Race and the Aesthetics of Visual Design". But his most impactful creation may be the Institute of Black Imagination (IBI), launched in 2020 which started as a podcast with interviews of Black creatives and a dream of it one day turning into a digital space. Now, nearly two years later, that dream has become a reality. In early February of this year, the New York-based artist’s podcast expanded into an interactive metaverse where users can engage with Calmese's extensive 2,000 book collection gifted to him by the late Geoffrey Holder. The 10,000 caught up with Calmese following the launch of the IBI metaverse to discuss the project and importance of making information accessible.

You founded Institute of Black Imagination, which you describe as “a tribe of mentors from the pool of Black genius, a collection of iconoclasts at the leading edge of cultural thought and innovation.” Tell us more about the project and the conversations you’re having on the podcast.

In conceiving of the IBI, I decided to start with the podcast, knowing that a digital space was the goal. It was practical in one sense, because as I was applying and getting shortlisted for grants for the digital space, I just wanted to get started; podcast equipment I could afford, but the funds for a digital space to house The Holder Collection... I definitely didn’t have. On the other hand, I thought it would be a great way for us to build community and develop a vocabulary around this idea of “Black Imagination” which in 2019 (when I began in earnest), not many people were talking about.

The conversations are with a mix of bold-faced names, and also with individuals who are doing equally incredible work, but may not be household names. It’s important to me that we, as a people, create our own record, our own oral history. I was appalled when I moved to New York and discovered so many incredible Black creatives that never made it to my history books back in St. Louis, and the IBI podcast seeks to repopulate that canon.

What started out as a podcast, is now so much more. This month, the Institute of Black Imagination moved into a digital space. Why was it important for you to create this space?

As I stated earlier, a digital space was always the goal. The Institute began as a library; I inherited over 2,000 volumes from the personal archive of Geoffrey Holder, and wanted to create a space for other Black and Brown creatives to have access to all of this wonderful information; everything it takes to become.

I became good friends with Geoffrey’s wife, the legendary dancer Carmen de Lavallade, after choreographing two pieces with her. Through Carmen I met Geoffrey, and was given access to his storage loft where I was simply overwhelmed by the vast number of costumes, paintings, sculptures, scripts, and of course, books. As a creative working in multiple disciplines, I struggled to find a mentor–someone who was moving through the world in a similar fashion–and in encountering Geoffrey and his archive, he became a mentor-figure (he passed shortly after I met him). What I encountered in Geoffrey’s loft was a blueprint; he’d left behind a roadmap to creativity, and though the vastness of his collection, I saw how much input it took to create an output like that.

After he passed, I knew we should keep the books together to allow others access to information that could ignite their own imaginations, so I petitioned Carmen, ever so gently, over three years. Eventually I was able to acquire a significant portion of the archive, and the IBI was born.

Tell us more about Black Imagination’s most recent launch, IBI Digital. What can visitors to the space expect to see and learn from the digital platform?

IBI Digital is an extension of the archive. One of our core tenets at the IBI is “liberative design” of which “access at the genesis of creation” is a big part. One of my favorite mantras is “Let the problem become the solution.” While I was in the process of applying for grants, I was asked what I would do if we weren’t able to meet in-person (because of Covid-19), and so I said I’d create a Digital Interactive Platform, that would give the same level of access to information as the digital space, but would be its own unique experience, not a watered-down version of the physical archive.

What we created was FAR MORE than I had originally envisioned. We created the site to behave like a game; I wanted users to actively engage with the content, not just passively consume; you have to bring yourself to the experience. On the site, you’ll find not only books from the archive, but videos, essays, projects, photography, and various other cool content from around the diaspora. We also created a visual podcast player so that our listeners could have a unique visual experience with what is usually audio-only. It’s an exciting place to be!

What are your hopes for the future of the Institute?

That’s top secret. But what I can say is that everything we do is proof-of-concept. It’s extremely iterative, meaning we test, execute, and revise constantly. A permanent home is definitely on the vision board.

February is Black History Month. What kind of future do you hope to create for rising Black artists? How will the Institute help with that?

I hope to create a future that works for everyone, or at least a significant majority of the populace, and that begins by making sure that those who have been systematically designed out of basic consideration and care, have access to their imaginations; we’re all depending on it. The state that we find ourselves in; a direct product of a white- supremacist, capitalist, imperial and colonial patriarchy... is not working for ANY of us. Look at our environment. Look at our bodies. Look at our drug use (prescription or otherwise). Look at our thirst for violence and distraction. Look at our ridiculously high college tuition rates. Look at our cities. Look at our rates of cancer and other diseases. This is untenable and unsustainable, and we only need to look to those who historically have assumed and fought to be in power to find the root cause. Do we think these are the very same people who can show us a new way of being? Right.

Visit blackimagination.com and complete the puzzle piece to explore the institute’s digital space. The Institute of Black Imagination 9 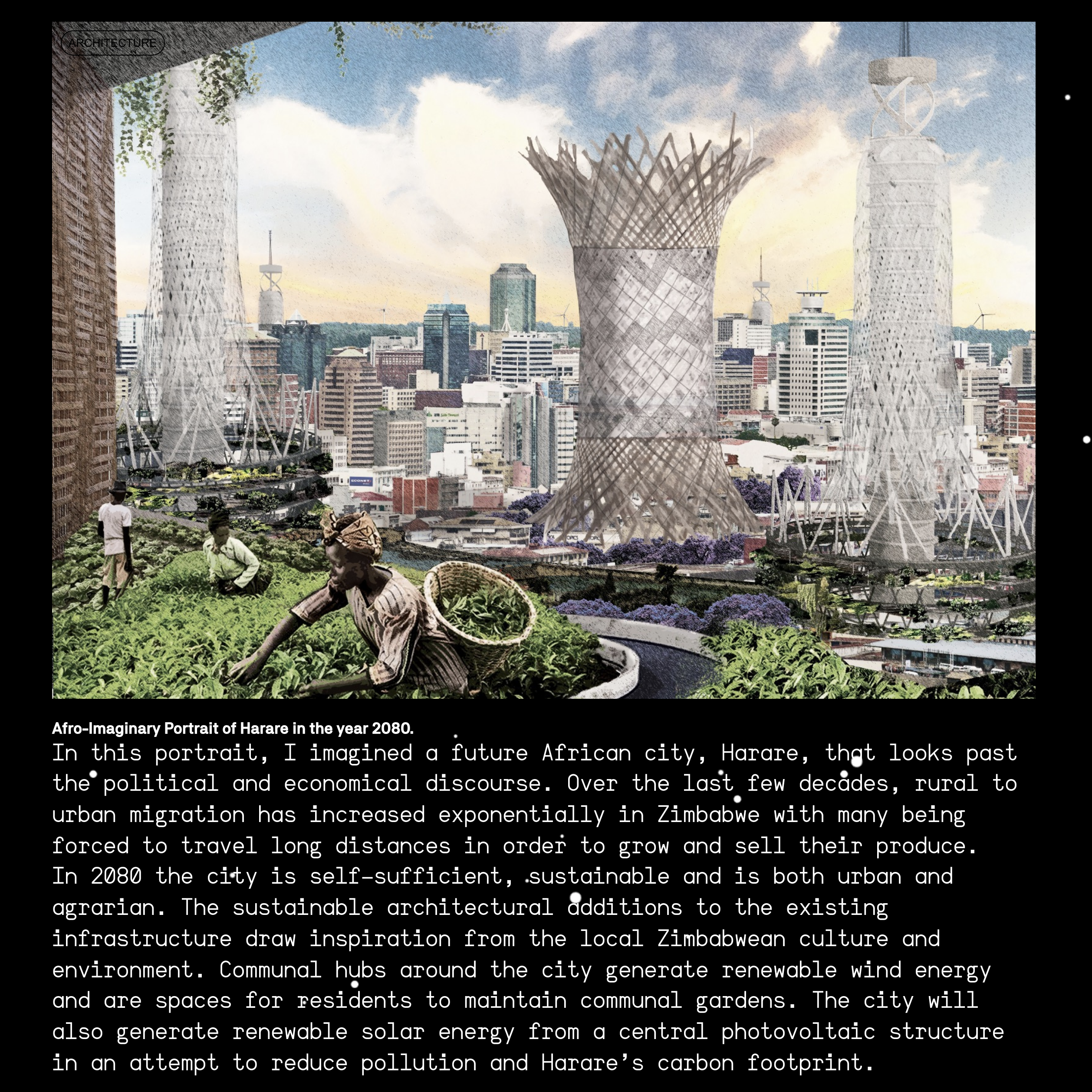 The Institute of Black Imagination 12 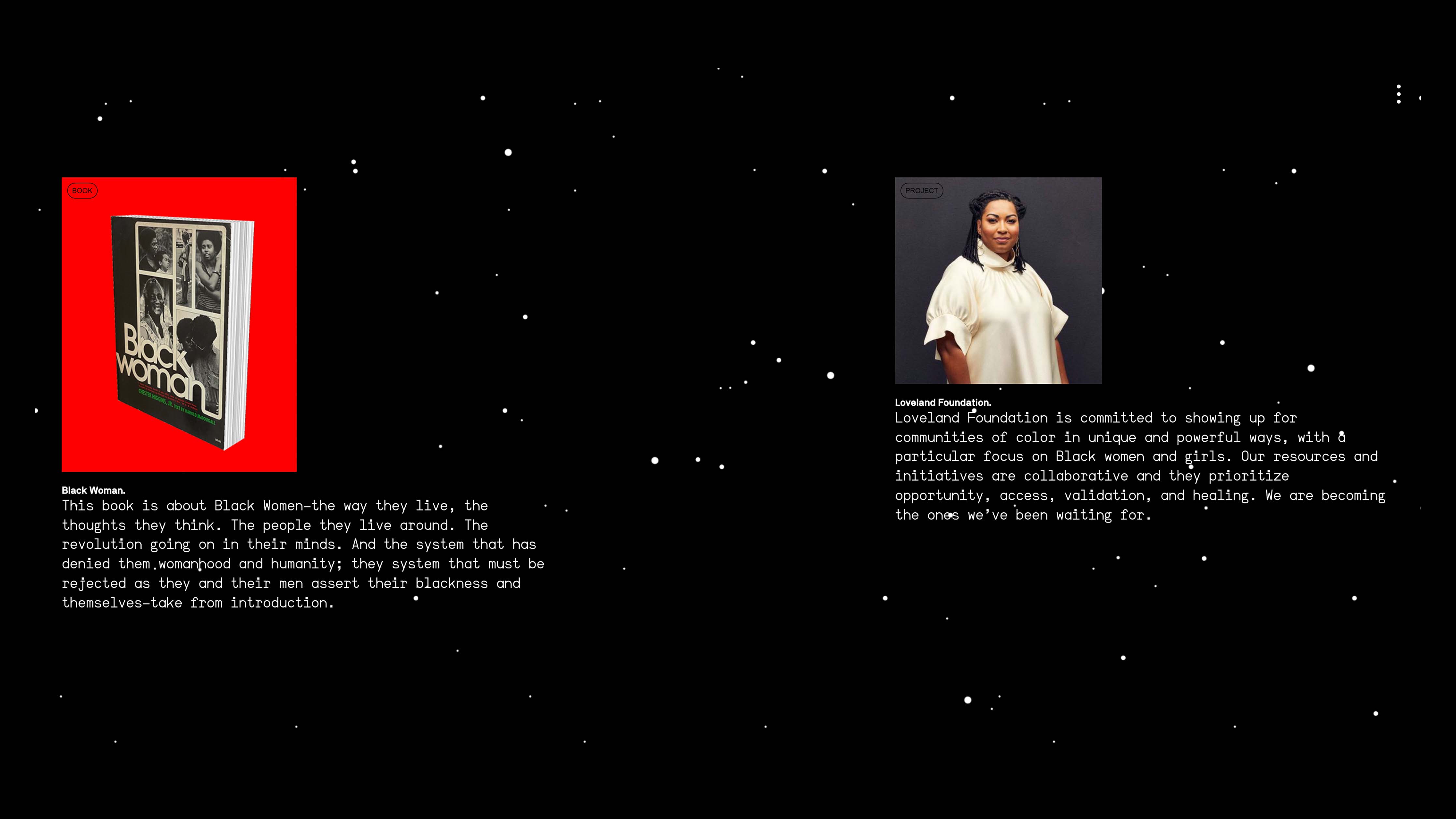 The Institute of Black Imagination 13. A selection of works users can explore in the IBI metaverse.