Matthew Rhys, known for his TV and film starring roles in Brothers & Sisters, The Americans, and It's a Beautiful Day in the Neighborhood, recently completed a lengthy restoration project of a rare 1939 Hemingway-era boat, aptly named Rarebit. The 10,000 spoke to Rhys about his acting career, what led him to purchase the vessel, the tips and tricks he learned along the way, and how the wooden boat, currently docked in Brooklyn, is used today.

You’ve starred in many film and television programs, including The Post, A Beautiful Day in the Neighborhood, Brothers & Sisters, The Americans, and more. Is there a specific role you enjoyed the most?

It was the part of Philip on The Americans that to me was the greatest challenge as so much was going on internally for him at any given moment. Here was a man who wanted to defect from the KGB, although the woman he loved was staunchly against it, had lied to his children his whole life - desperately wanting to tell them the truth and secure and protect their future. He had also destroyed the lives of so many innocent people and continued to do so, so as not to be suspected by the organization that had taken him as a boy. Even just reading that, you realized the enormity of the juggle but playing it was such a rich and varied gift of a part.

Such an intense and rich role. Outside of acting, you purchased a 1939 rare wooden fishing boat of the same era as Ernest Hemingway’s famous “Pilar” vessel and then spent four years restoring it. What sparked your interest in buying the boat?

Four years ago (late at night) I was skimming through eBay looking at boats (which I enjoyed doing) when I came across this old Wheeler Playmate. I knew instantly this was the same class of boat that Ernest Hemingway had and was shocked to see one for sale as I knew they were also pretty rare as this class was built back in Brooklyn in the 30’s. What clinched it for me was her name - Rarebit. There’s a dish (basically an open grilled cheese sandwich) called ‘Welsh Rarebit’ and so, through rose tinted glasses and scotch fog, I bought her. Had I realized what was ahead of me - I certainly wouldn’t have. 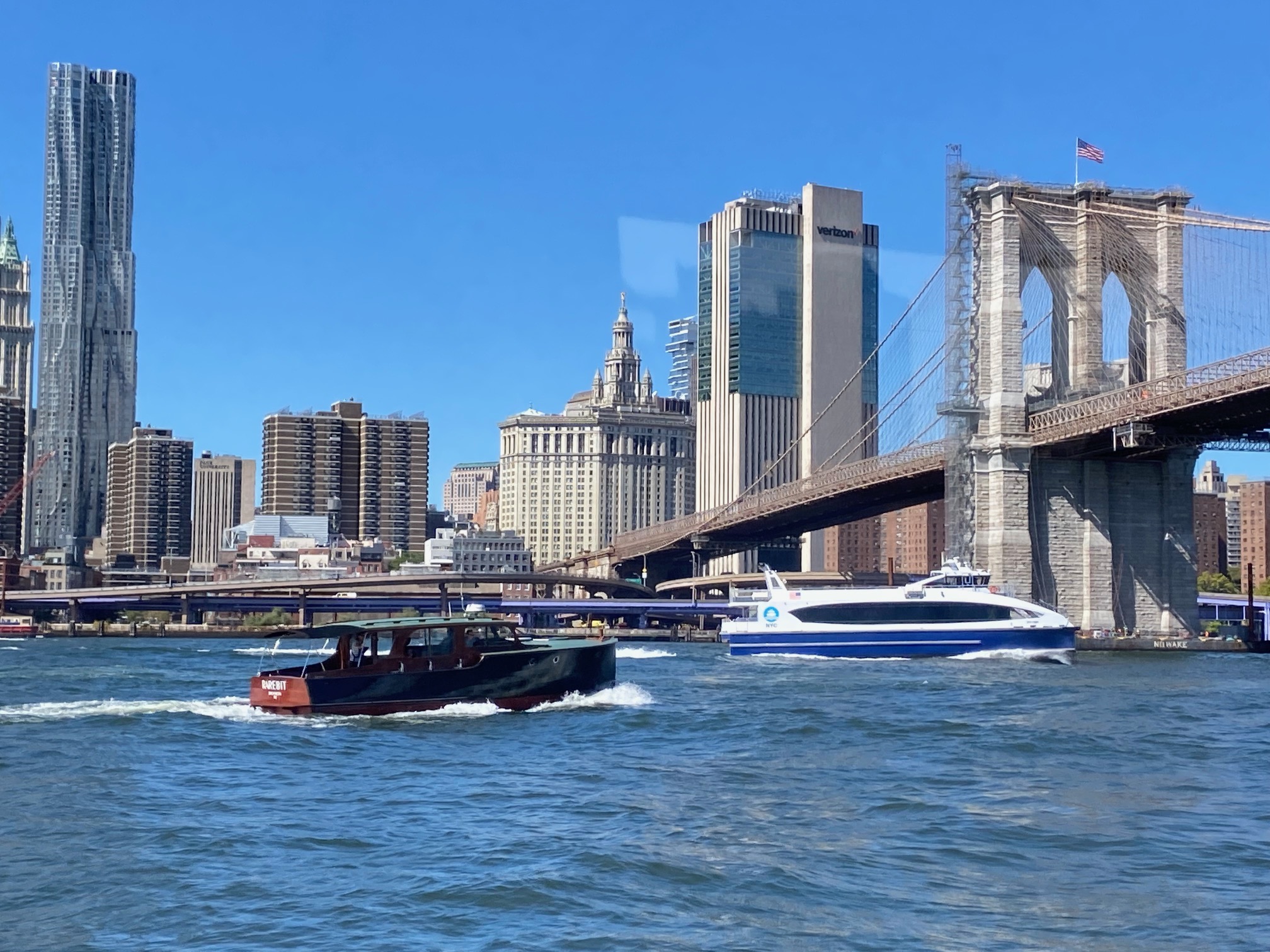 Matthew Rhys' boat, inspired by Hemingway's Pilar, can be seen cruising through the waters surrounding NYC. 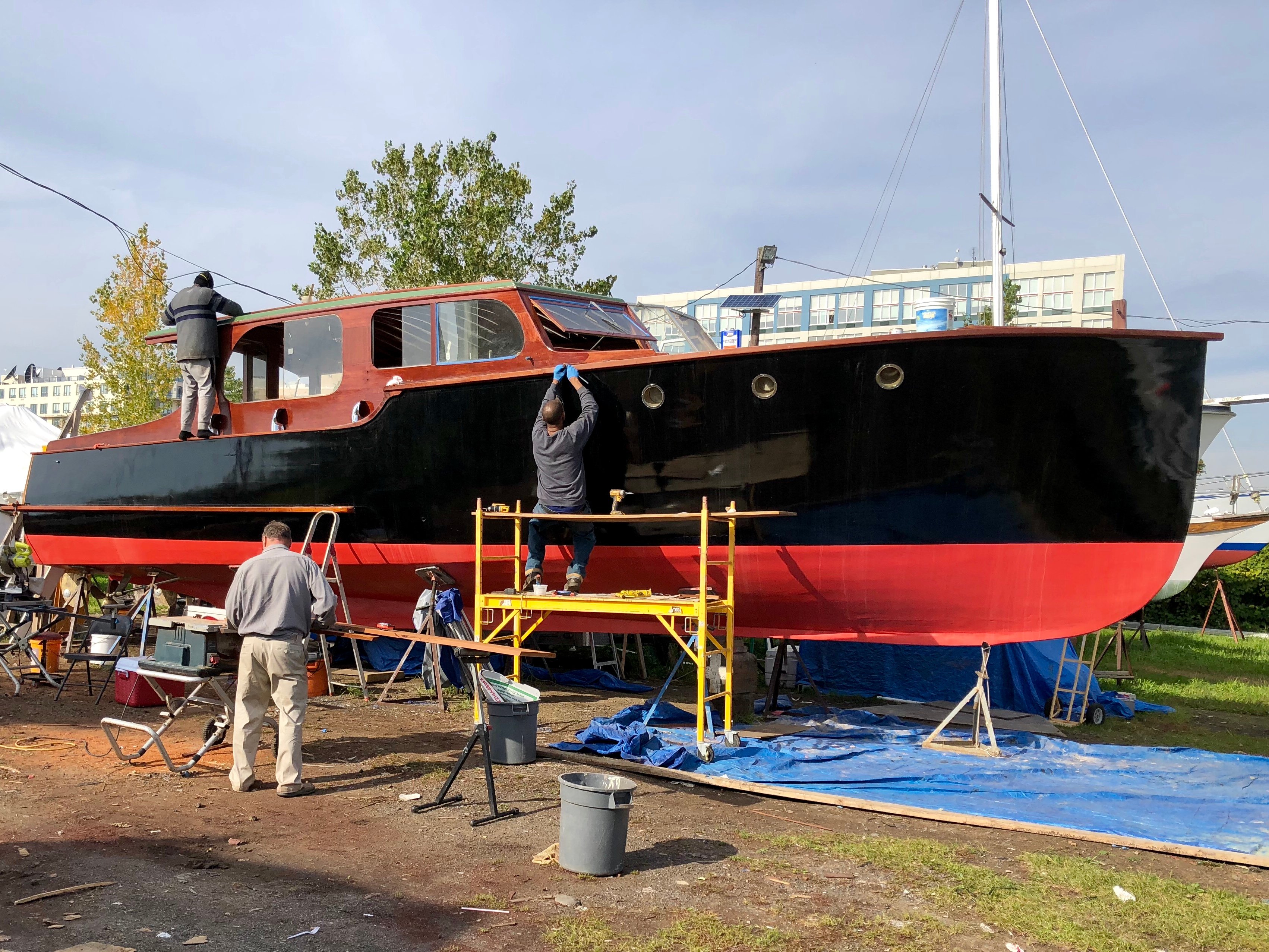 The wooden vessel in the final stages of a lengthy restoration project.

Tell us more about the craftsmanship of the boat. Are there any small details you intentionally included during the restoration?

The restoration took three and a half long years for many different reasons. Along the way, there were many YouTube tutorials watched and learning on the fly, but we got there in the end.

From the moment I bought her [Rarebit] my plan was to have her be a charter boat in New York harbor for a number of reasons. Primarily, this would be the type of boat I would want to charter, i.e. a piece of Brooklyn history with near mythical and literary lore— thanks to Hemingway and the small and intimate setting able to hold six people. And so, my main intention was to recreate Hemingway’s Pilar to a degree. We painted the hull black and the decks green like Pilar and had to replace the floor with mahogany, which took a long time to source the right wood. My great hope was that Rarebit would have the same “feel” as Hemigway’s Pilar, so we added a gramophone and other small touches to evoke a certain time period.

What was the greatest lesson you learned throughout the lengthy restoration process?

One of the greatest but hardest lessons on this restoration project was how badly people can and will let you down. The reason it took so long was because people consistently lied about their skill set and what they were able to do and achieve. So much so, that after the first year and a half of being ripped off and deceived, my Captain (Kelli Farwell - who single handedly took the reins and made this renovation work) and myself, set about undoing everything and doing everything ourselves. It sounds like a cliche but what I learned most is that you really can (almost) do anything you set your mind to. (YouTube helps). The one big victory for us was curving a very long piece of mahogany for a rail. We built a trench, lined it with polythene and soaked it for weeks. Then, once it was saturated we bent the rail into the desired shape and screwed as we went. Accomplishing that was a big moment for me.

Many people wanting to buy a boat do not even consider purchasing a wooden one. What attracted you to the design of this vessel specifically?

Outside of the Hemingway element, her name and so on, the reason I was so attracted to a wooden boat is because I’m a lot more of an analog person than a digital one. My diary is still a black leather moleskine and a small pencil. I’m drawn to a bygone age and things of yesteryear. That all said - I think she’s a beautiful vessel. Her ‘lines’ still make me stand in awe that they did this in the 30’s just by steaming wood.

A recent New York Times article mentions 1930s jazz music can be heard coming from your boat cabin. Is jazz your music genre of choice? What are some of your favorite musicians or songs?

The boat was built in 1939 and so when coming aboard I want people to experience just a whiff of that age. So we have a gramophone with jazz records and coolers from 1939. I wasn’t much of a jazz fan beforehand, but now that we have the music on the boat, I have started to really enjoy Django Reinhardt, Benny Goodman and Charlie Parker. (As well as all the greats - Holiday, Armstrong, Fitzgerald and Ellington).

Halloween is coming up. As acting is your main professional career, do you enjoy the holiday and do you have any costume ideas?

I have to admit - and I sound like a Scrooge/Grinch - but as someone who dresses up for a living, when the kids ask me to dress up for Halloween I always say I’m going as a plain clothes cop. I know I’ll give in and find myself as Darth Vader. 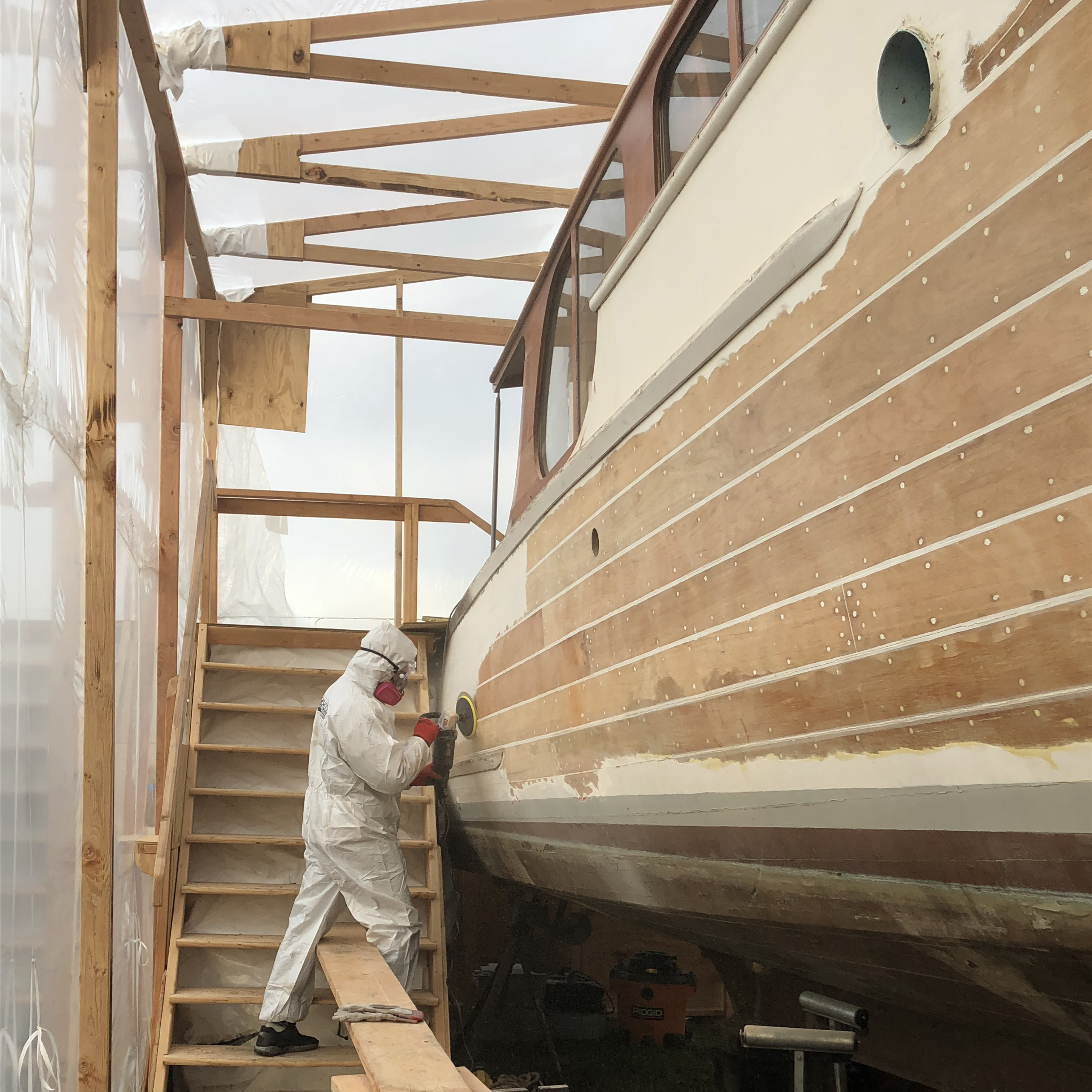 Rhys, alongside his Captain Kelli Farwall, completed much of the restoration themselves. The boat under restoration 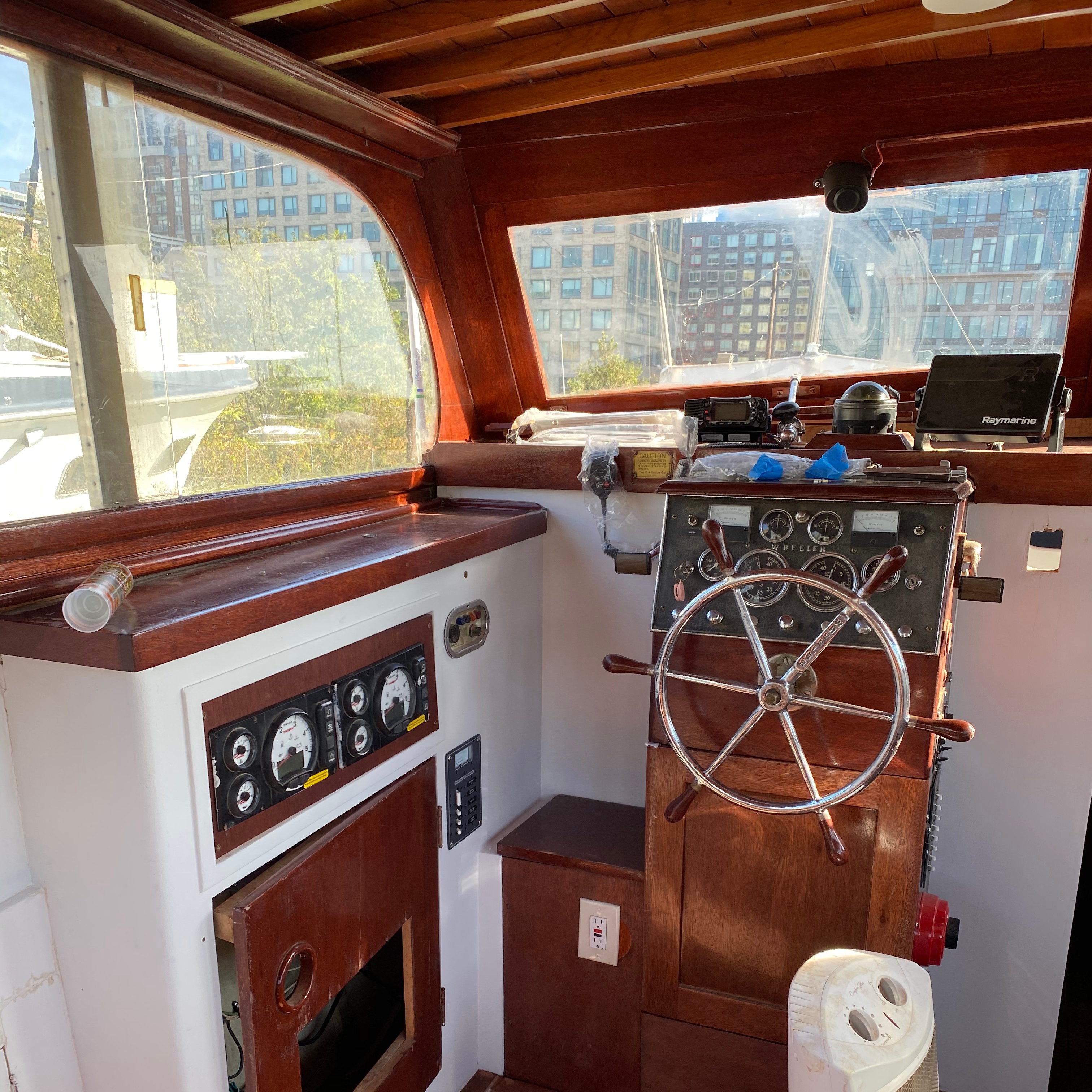 Small details inside of the boat maintain its roots of a 1930s Wheeler Playmate. 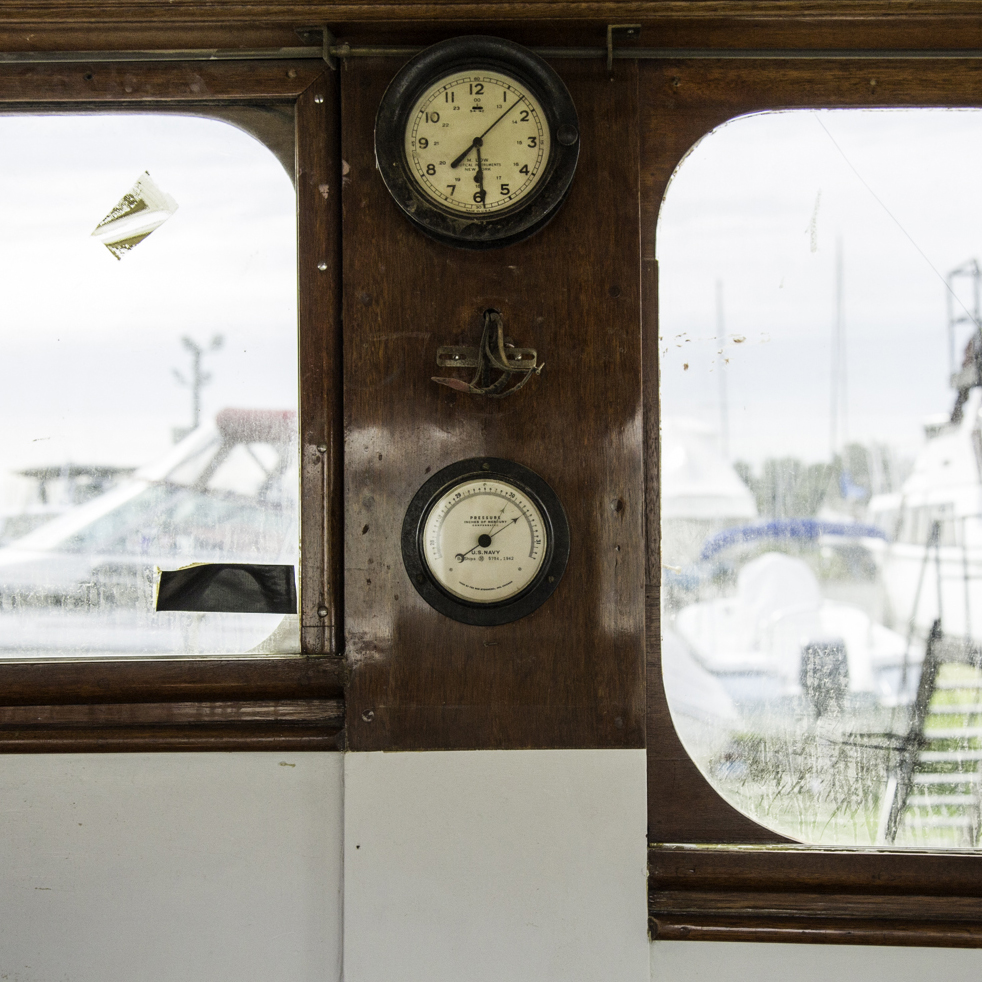 The inside of the boat. 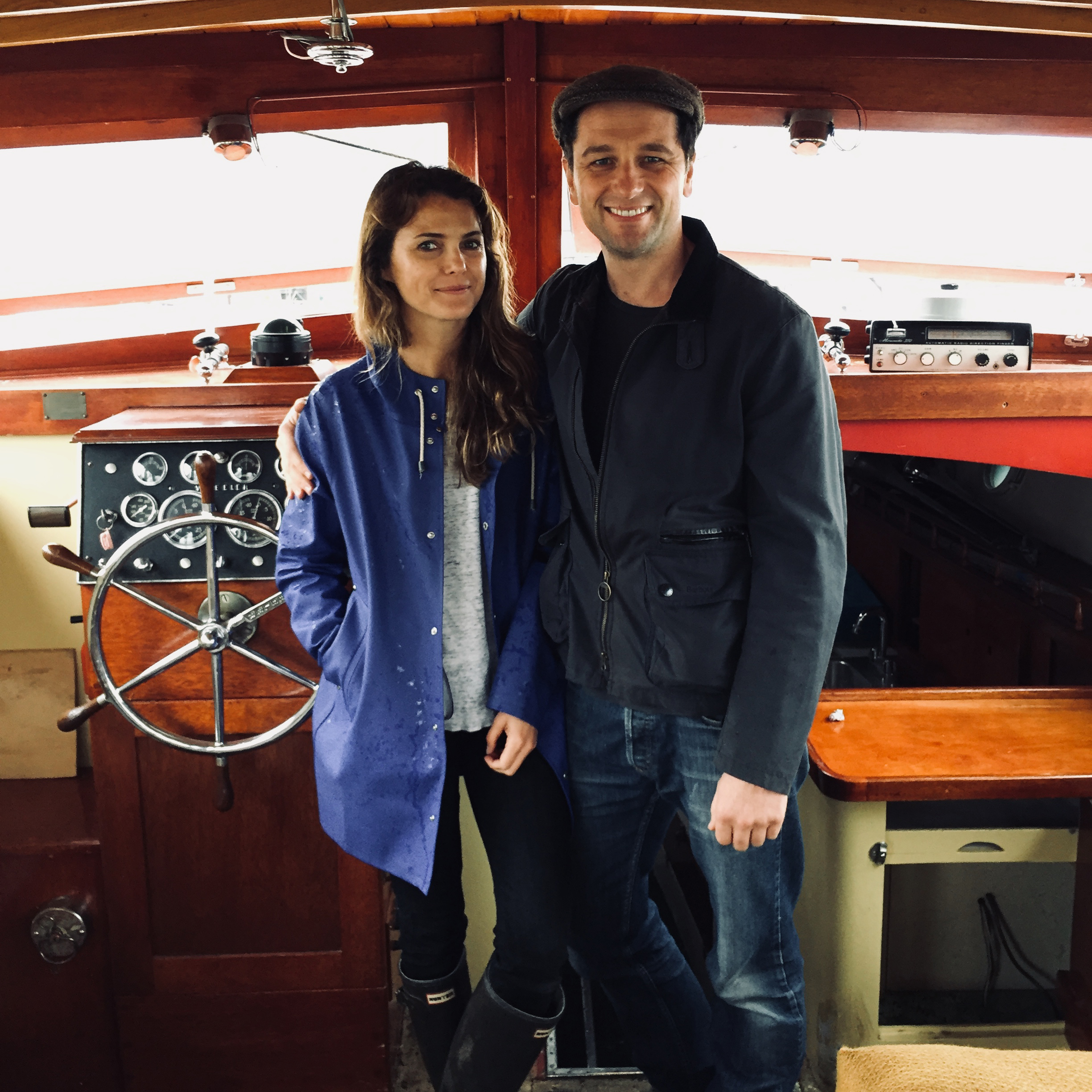 Rhys and his partner, Keri Russell aboard Rarebit. 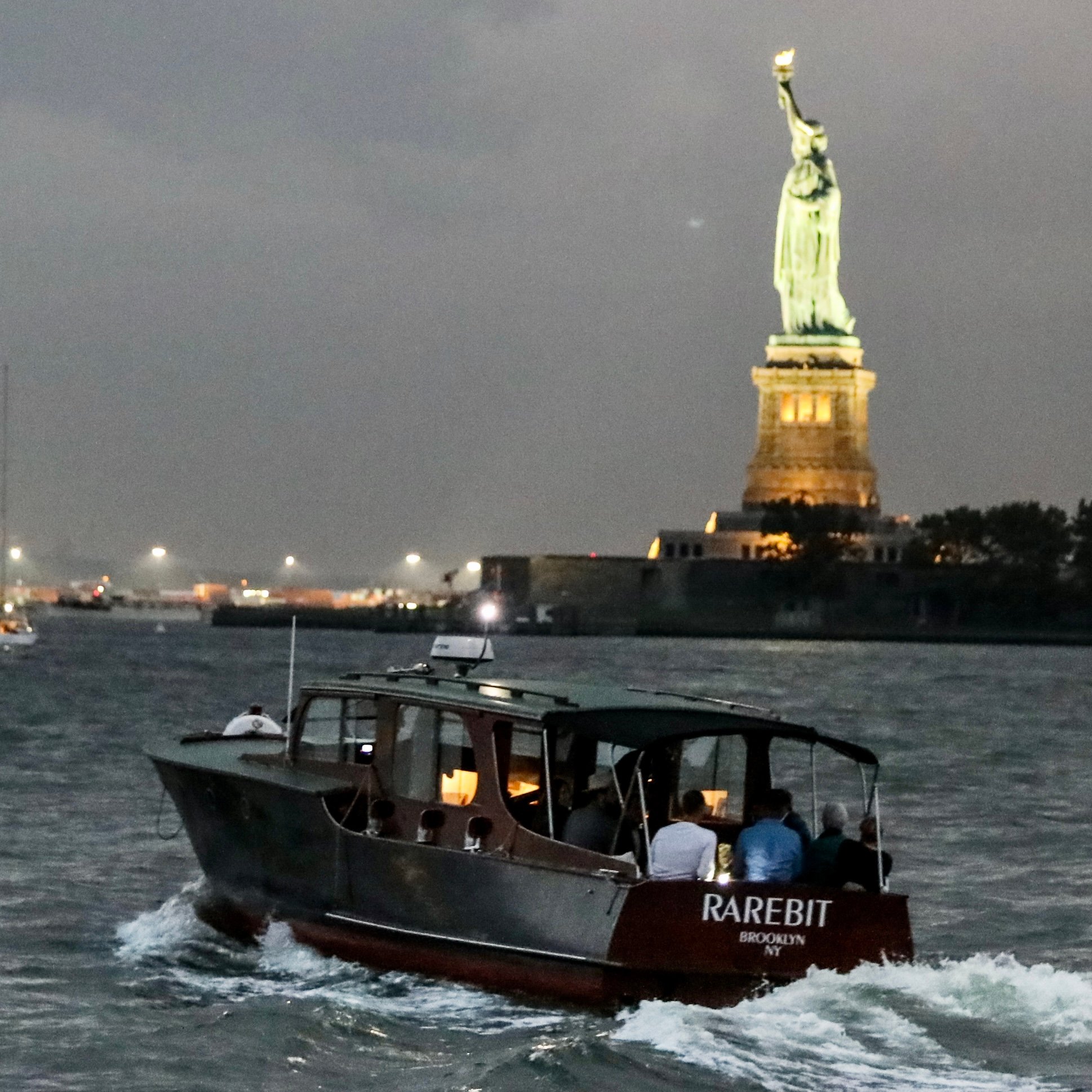 Rarebit is used as a charter boat in NYC and can host small groups of up to six people.
Related Stories