Working in the building on top of which one of your more seminal pieces of art is displayed is a rare perk not afforded to most artists. But Tom Fruin is not most artists.

"If you guys are interested, we could go up to the roof," is one of the first things Fruin says to us upon our arrival at his Dumbo studio. "You can see it better from there."

The "it" Fruin is referring to is Watertower, the contemporary artist's first in a series of public sculptures that have appeared along the Brooklyn waterfront in recent years: one here in Dumbo, one in Brooklyn Bridge Park, and a third in Greenpoint. Made up of steel and salvaged plexiglass, Fruin's brightly colored, stained-glass-like water towers were made for the public eye.

"I'm not looking for an 'art' audience," Fruin says. "I really just want to reach everybody."

So why water towers?

"Being sort of a New York transplant, [the water tower] is a symbol, I thought, of New York." Fruin is originally from Los Angeles, and moved to New York City in the '90s. "It's casual, it's cool, it's made of wood, it's round—I got drawn to it. It seems like a place for humanity within the urban environment."

And that urban environment is incredibly important to Fruin and his work. "The city's my thing," Fruin enthuses. This comes through not only in the form his work takes, but also in the materials he chooses to use. "If I were in the country, I'd probably be making stuff out of leaves or whatever." Instead, Fruin has chosen materials that are easy to come by in a place like New York. "For me, there's no canvas, no paint; everything that I use generally is because it's free. I'm pretty scrappy. I've become the guy—the sign guy, the plexi[glass] guy. People just deliver it to me. They don't know what to do with it, so they leave it on my door and I find it. I'm making things out of what I know."

When asked what his advice would be for up-and-coming artists and creatives, Fruin says, "Wake up early and just hit it hard. It's mostly about luck; I mean, that's probably the unfortunate reality. But if you wake up early and hit it hard, then you've got a chance. Keep going. Most famous artists are not that talented necessarily; they're just persevering. I noticed this even as a youth. People [who would] keep working, keep pushing. And that's what I do." Given we're a blog who took our name from the theory of The 10,000 Hour Rule, we can definitely relate.

After spending some time in Fruin's studio, we take the artist up on his offer to see his nearest Watertower up close. "I'm a rooftop guy," Fruin explains in the elevator on our way up to the roof. "Like a cat. I like to go on the roof and see what I can see."

On this particular rooftop, there's a good amount to see. We clamber over a rail, walk along a ledge, then climb up a ladder until we're standing right across from the first Watertower, which is impressive in and of itself. Add in the sweep of the Manhattan Bridge, the East River, and the Manhattan skyline behind Fruin's sculpture, and it's a view that really can't be beat.

What's it like getting to go to work and see your own art right there, every day? we ask the artist.

"That's the coolest thing," Fruin says. "I actually get a lot of emails and posts on Instagram, people on the subway, going across the bridges, saying, 'that's so meaningful to me, that your thing is up there'."

There's no doubt that Fruin's work has changed the Brooklyn waterfront and New York City as a whole for the better. So what's next for the artist? "I have a piece I want to make for Detroit, which is a smokestack. Then I have a piece for L.A. which is going to be a billboard. It's what you don't notice that's emblematic of a place. And what you don't even respect. It might be a dumpster, or a mailbox—who knows? But I think there's a way to celebrate that." 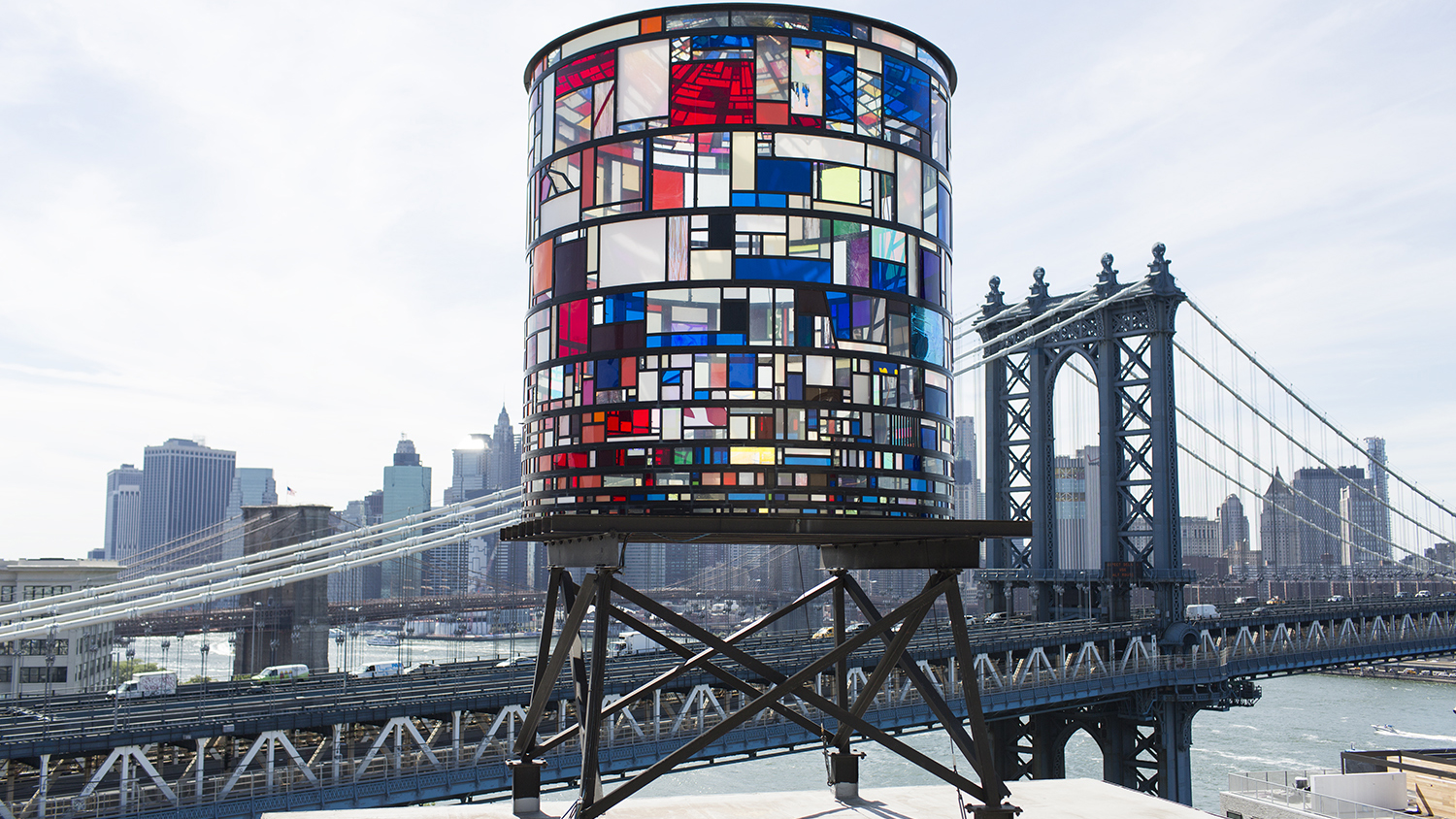 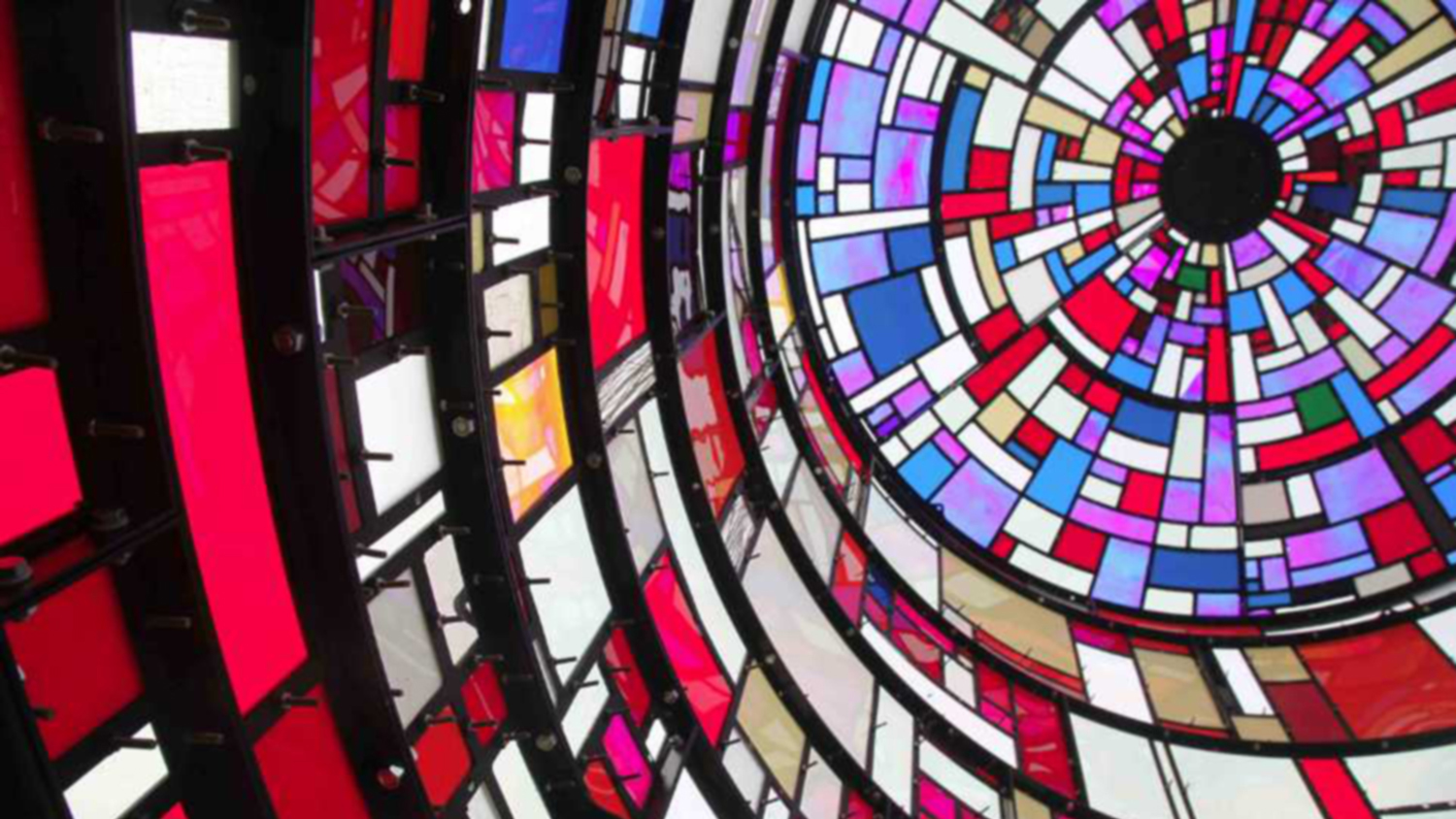 A look at the inside of Watertower. Photo by Robert Banat 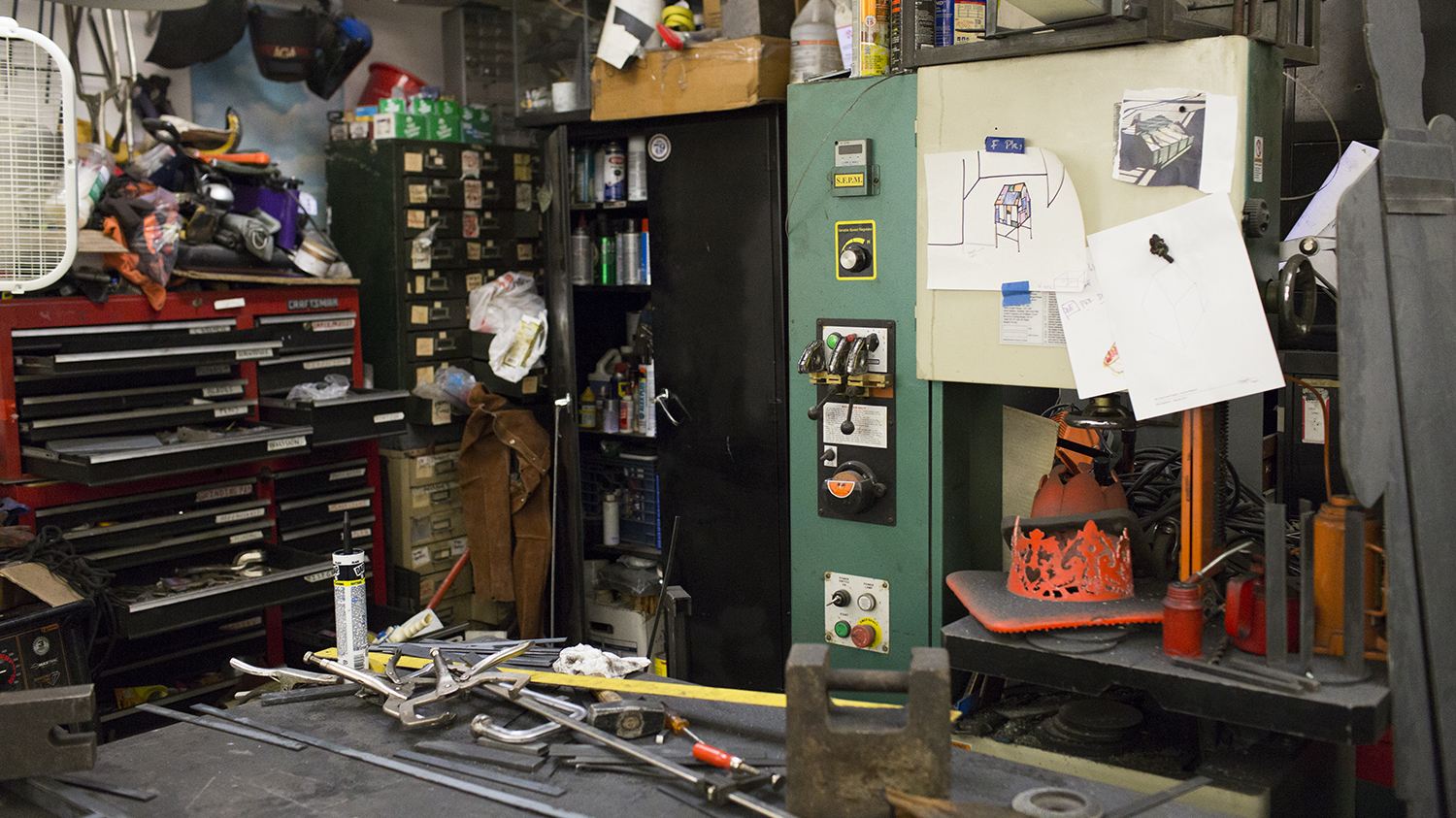 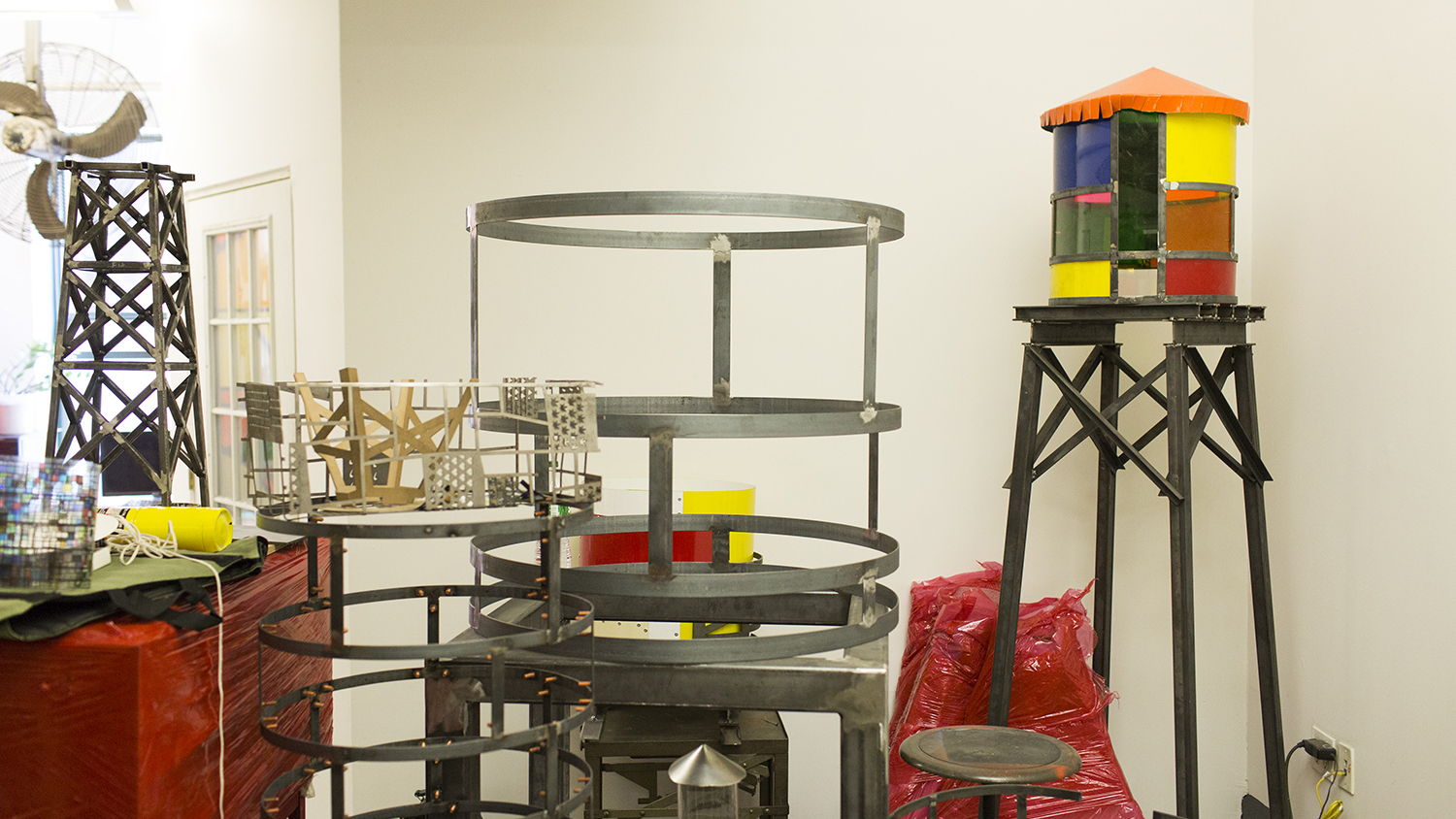 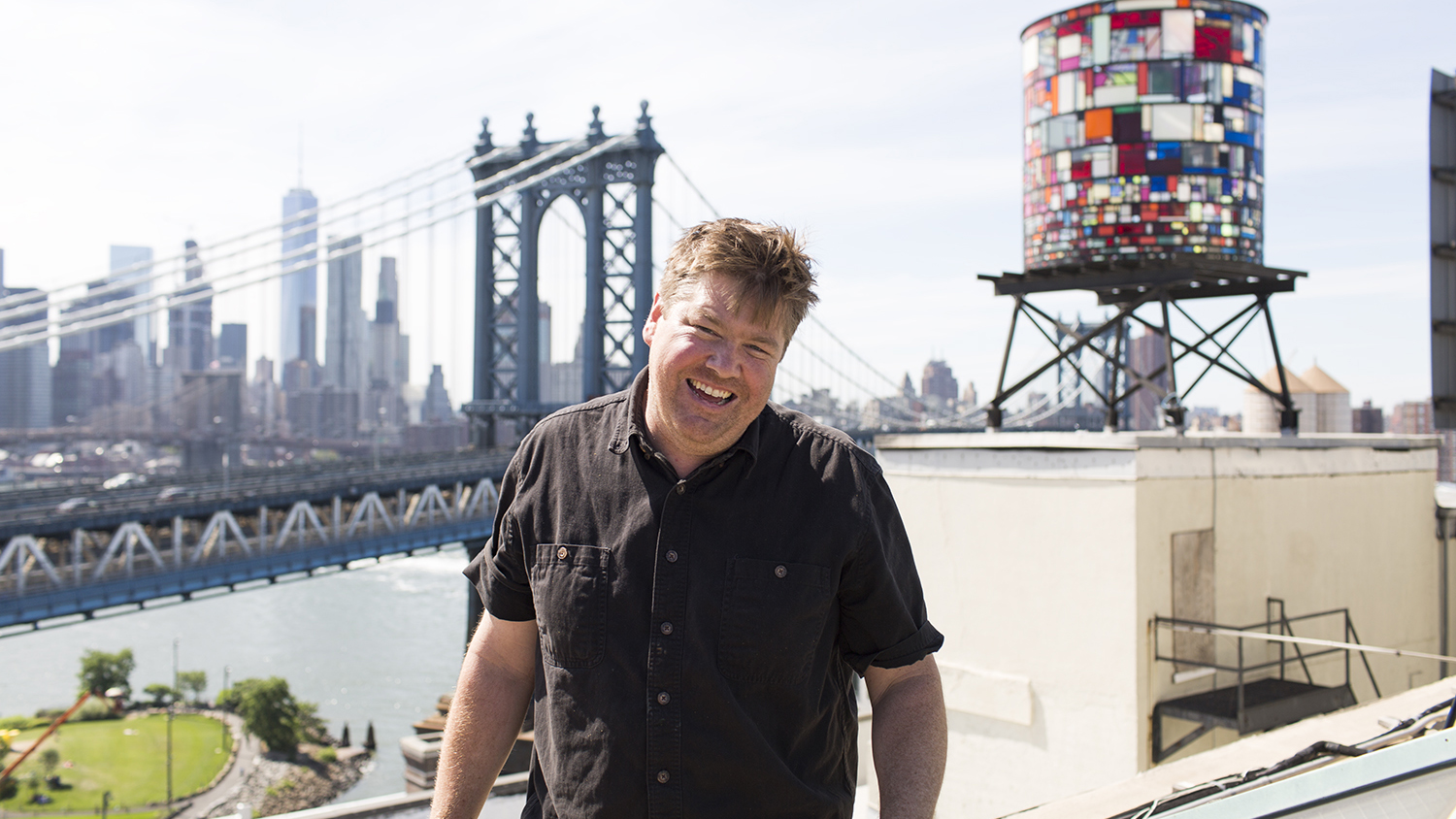 Fruin in front of his Watertower
Related Stories