With a career spanning over seven decades, French designer and visionary Pierre Cardin is a force to be reckoned with. “Pierre Cardin: Future Fashion” at the Brooklyn Museum is the first New York retrospective on the legendary couturier in forty years, celebrating his career and genius with over 170 objects from his atelier and archive. We spoke exclusively with curator Matthew Yokobosky to delve deeper into Cardin’s world, where gender norms are blurred and space-age ‘future fashion’ is celebrated.

You have an extensive background in art and fashion. What initially piqued your interest in both these creative industries?

I started out in film, focusing on avant garde cinema. Unsurprisingly the arena that most often exhibited avant garde films was museums, which is why my first job was at the Carnegie Museum in Pittsburgh. It was only after I managed all the AV for an exhibition called “The Carnegie International” that I really began to see and understand the relationship between cinema and art. I’ve been on this specific trajectory ever since.

Initially I was most inspired by experimental filmmakers including Sam Brakhage, Tony Conrad, and Andy Warhol of course, mostly because they pushed cinema and redefined its parameters. When I first moved to New York I worked evenings in experimental theater at La MaMa in the East Village, which was how I became involved with fashion. It was a place where you could really just go and try things.

Describe your role as a Senior Curator of Fashion and Material Culture at the Brooklyn Museum and your involvement with Pierre Cardin: Future Fashion. How did the exhibit come to be, and what sets this exhibit apart from other exhibits you’ve curated in the past?

I look at fashion and how it tells stories about people, designers and material culture. With museum exhibitions we’re always looking for angles so that spectators leave knowing something new. With Pierre Cardin (who hadn’t had an exhibition in New York in forty years), I really took the opportunity to go back and rediscover a true icon of fashion. I became interested in Cardin about five years ago during a retrospective of Jean-Paul Gaultier, because Gaultier had worked for Cardin (which I hadn’t realized up until that point).

Pierre Cardin is known for his innovative, futuristic and cutting-edge designs. What impact do you believe his work has on the fashion industry today, and how will his designs continue to influence designers in the future?

One of Pierre Cardin’s earliest innovations was looking at the relationship and similarities that existed between men's and women's fashion in the 1960s, and what at that time became labelled as unisex. The skirt length kept getting shorter to eventually become the mini skirt, but what Cardin did was make men’s vests longer. This created a conversation between a man’s vest and a woman's mini dress, as both are now approximately the same length. Cardin then took an additional step and made both male and female models wear the same undergarments, a simple black bodysuit. I think when you look at Cardin and his influence on Gaulthier, which trickled down to impact the likes of Margiela (who worked for Gaulthier) and now Gailliano at Margiela, there’s a lineage of Pierre Cardin and this idea of blurring the lines between menswear and women’s fashion.

How does Pierre Cardin: Future Fashion explore the concept of genderless fashion, and how significant has its impact been on current fashion trends?

I think we have to remember in the West we have a lot more division between men’s and women’s fashion. If you look at the uniforms people wore in communist China or parts of the Middle East you will see that parts of our world already embrace a kind of genderless fashion. So for us to have this dialogue here in New York, the conversation skews more to blurring and finding similarities between all types of people. When you look at Pierre Cardin and you see these moments of fashion design which demonstrate that he was already anticipating this blur as the future of fashion, you really feel that he was very innovative, especially for the 1960’s.

The exhibit falls on the 50th anniversary of Apollo 11. Cardin’s work was heavily influenced by the moon landing and space travel during the 1960s and 70s. What connections between space and fashion will visitors see at the exhibit?

One of the interesting things about Cardin, in terms of understanding future fashion in the late 1950s and early 1960s, was that he regarded it in the same terms as costume designers rooted in film. Designs were very much based on fantasy - pieces were impractical at best. Cardin’s space-inspired creations before 1969 were very much in-line with what the world would have seen in Star Trek for instance, but after Cardin visited NASA his concepts changed dramatically. The designer developed an interest in whites and silvers, plus alternate detailing techniques which ultimately led to kinetic fashion, wherein dresses become moving sculpture. His designs worked to incorporate movement and ultimately notions of speed.

Pierre Cardin is 97 years old and is known to report to the office everyday. To what extent was he involved with developing and curating this exhibit?

I first met Pierre in the morning, and when I walked into his office he indeed was drawing and showed me some of his newest pieces. By the afternoon he had instructed his team to open up his archives for me - giving me complete access to all his creations. It was an extraordinary door to open! After I made a preliminary checklist for the exhibit I sent over a powerpoint presentation, to which Cardin gave direct feedback. Over the following weeks I’d occasionally get an email from his team, offering additional pieces for the exhibit, which was always a welcome surprise! 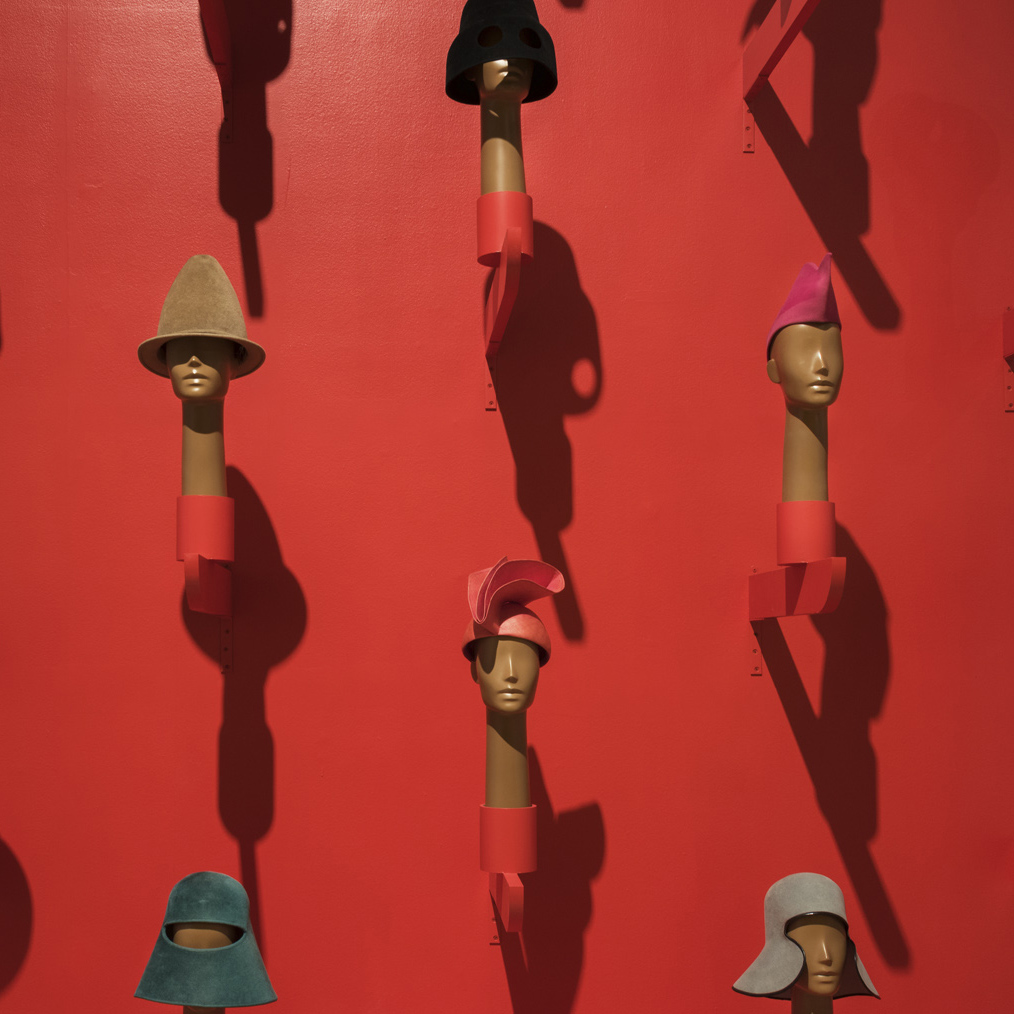 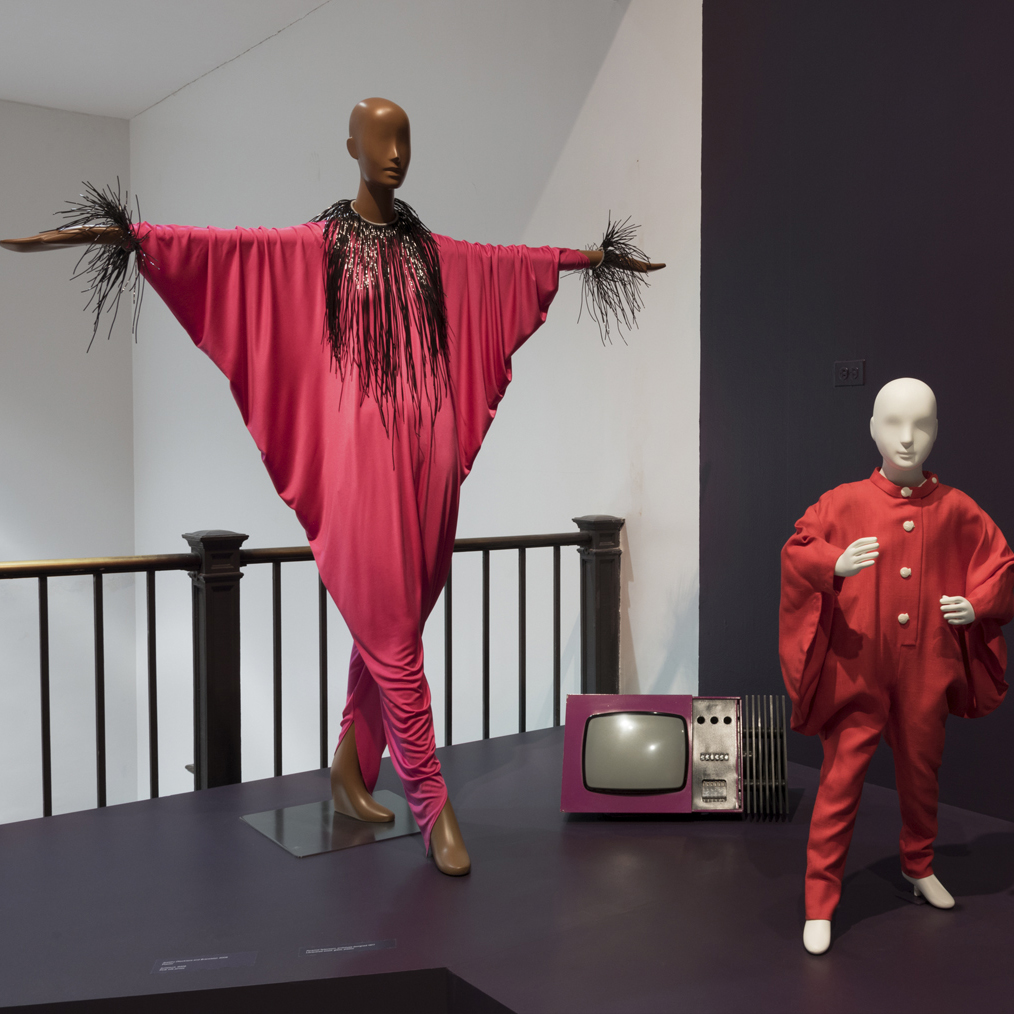 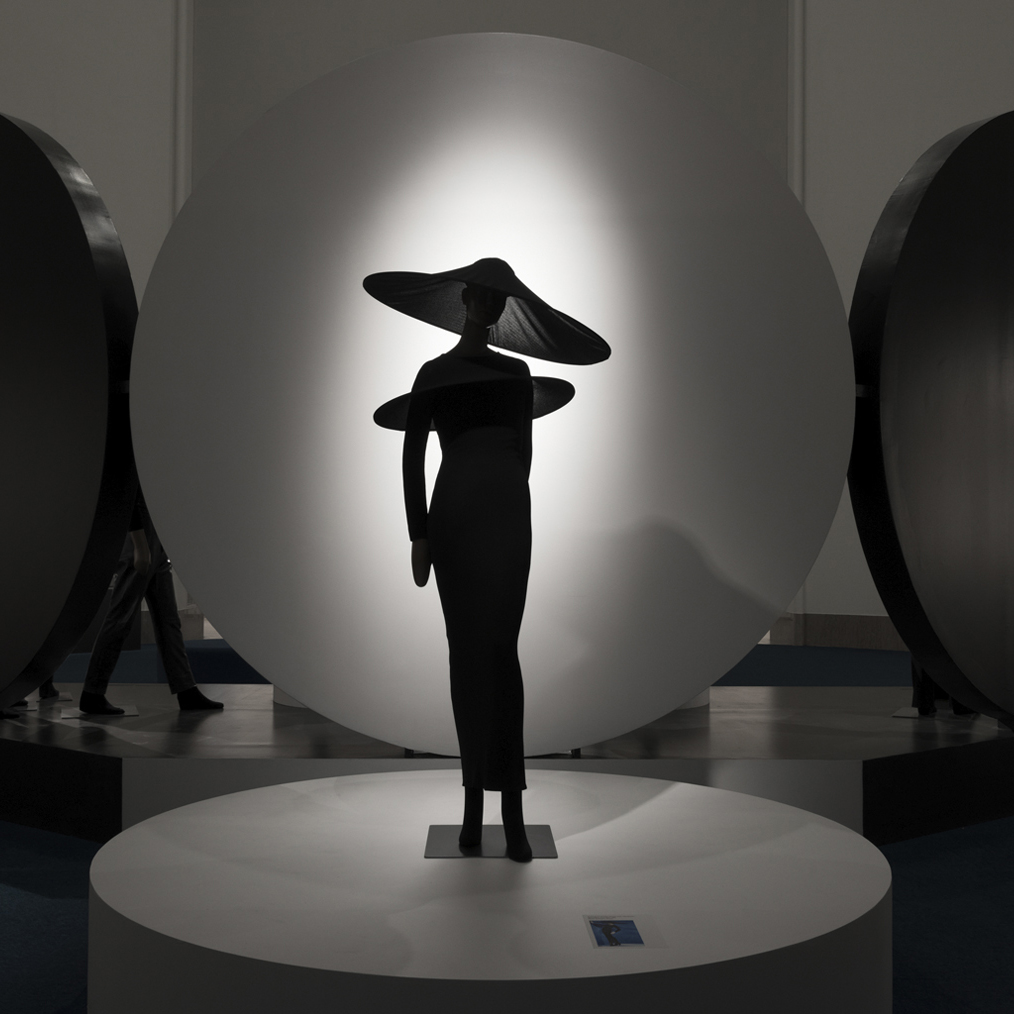 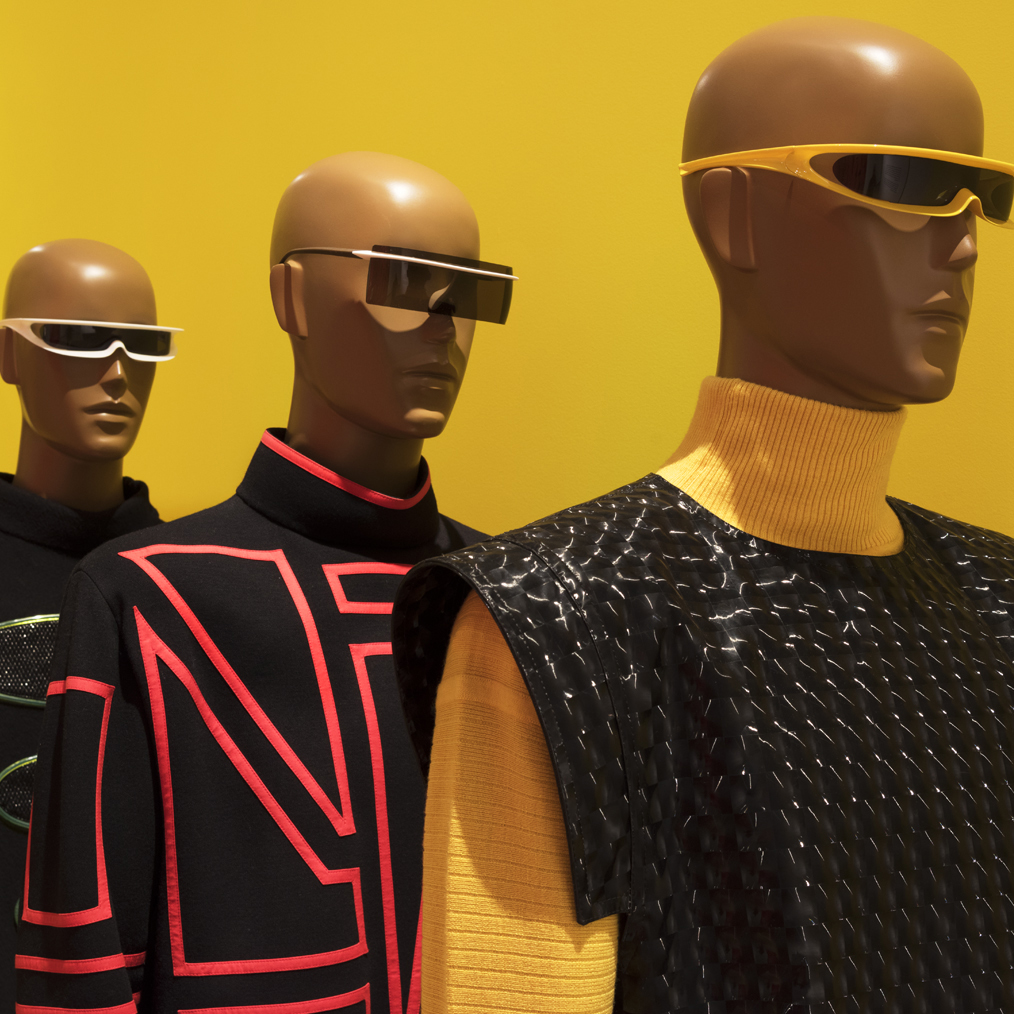 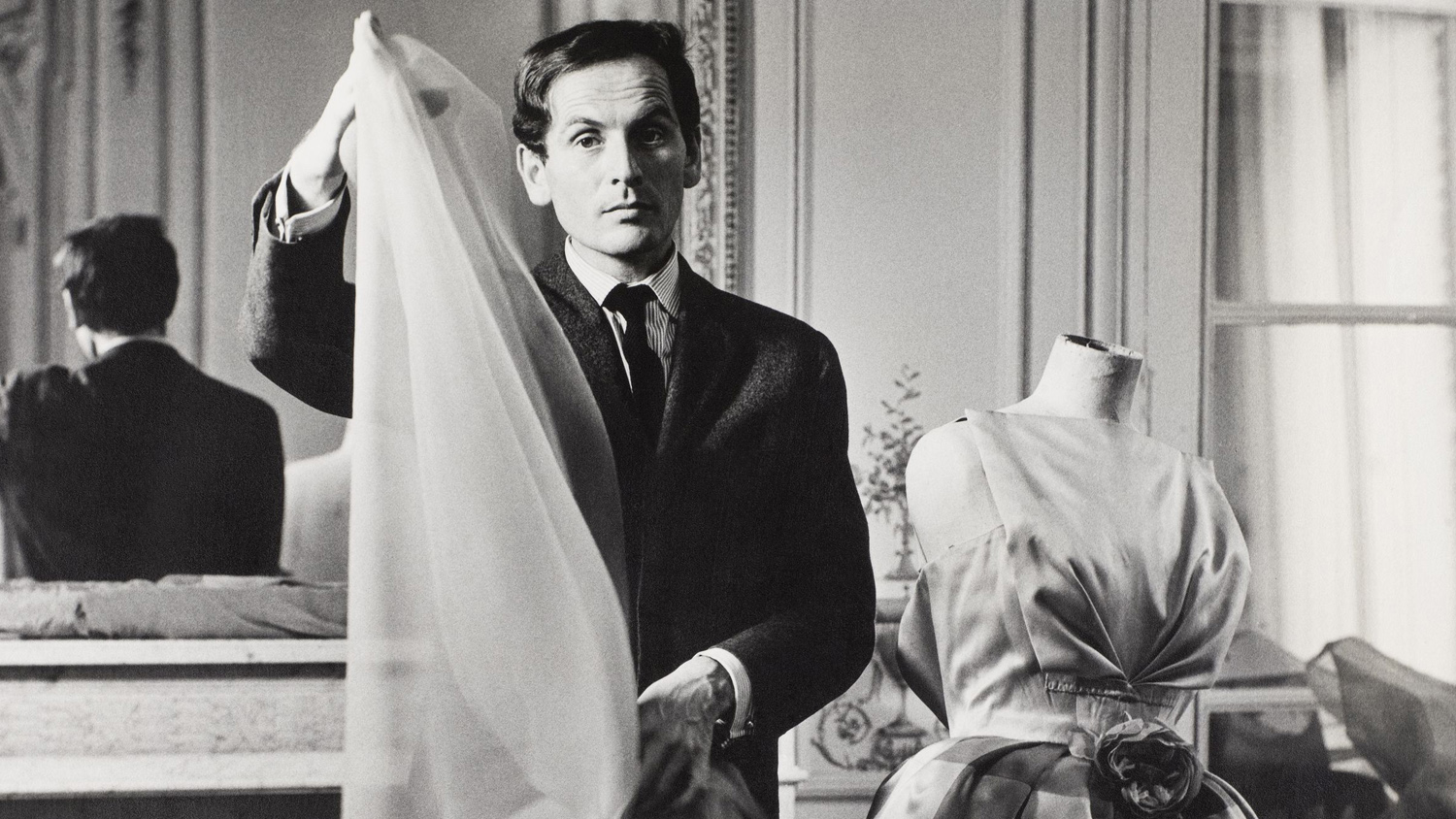 Pierre Cardin in his Atelier, 1957 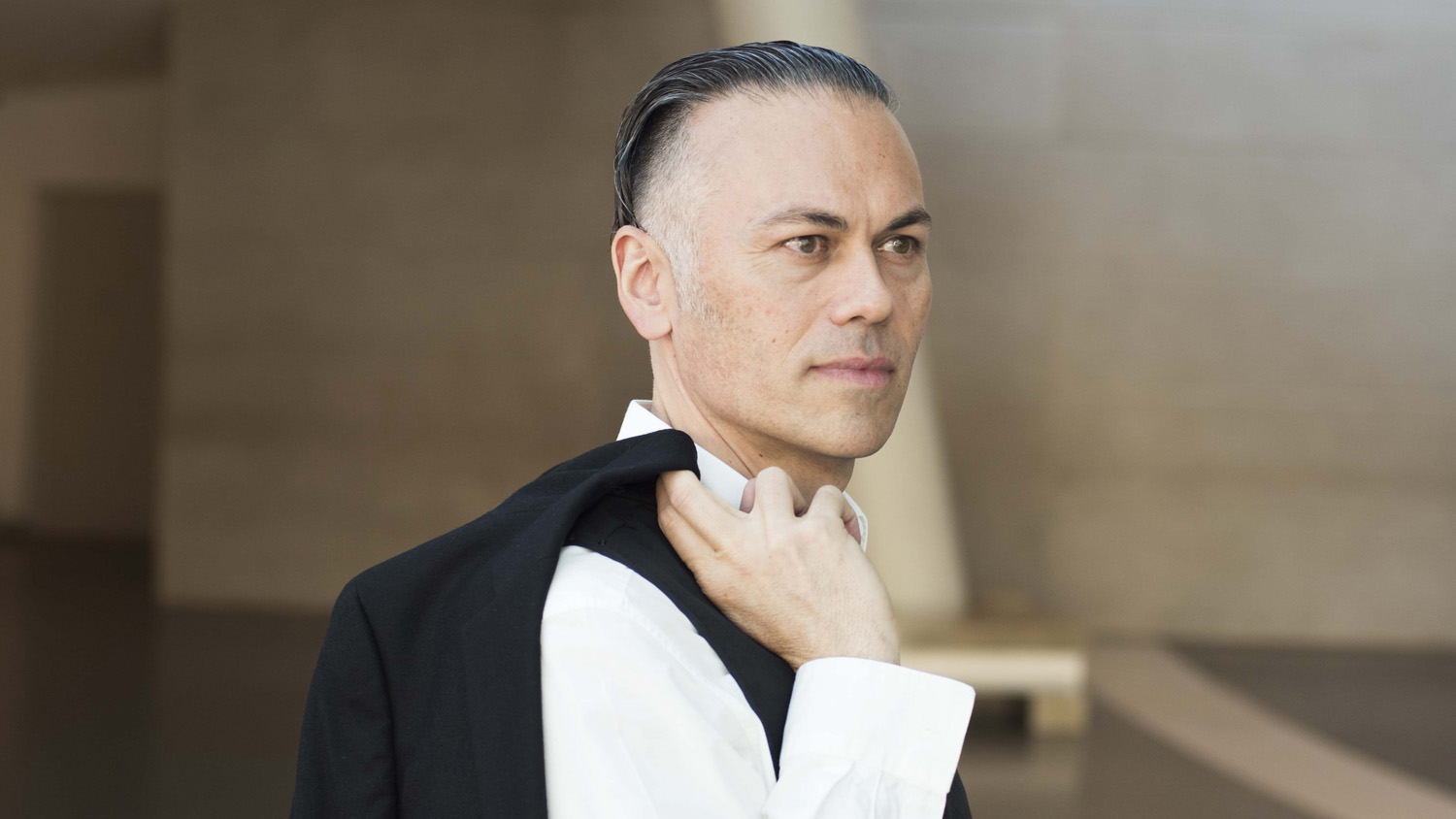