Master & Dynamic is obsessed with the interaction between sound and creativity. Our Synthesis Sessions are designed to be an actualization of our obsession. The program pairs two artists with environments and materials utilizing sound as the formative ingredient. The product is a unique combination of creativity, new ideas, and original output.

Master & Dynamic brought together Nate Lowman and Majical Cloudz, the subjects of Synthesis Session 1, as an actualization of our obsession with the interaction between sound and creativity. The resulting painting was auctioned off and all of the proceeds will support our commitment to arts education at Harlem Village Academies.

The result is creative synthesis in action. The painting, "Orders From Corporate (Randall's Island?)" by Nate Lowman, was inspired and influenced by the musical compositions of Majical Cloudz.

Commissioned by Master & Dynamic, the 60 x 40 inch two panel canvas was inspired by a visit made by electrical sound artist Majical Cloudz to Nate Lowman’s studio to explore the interaction between sound and creativity. The painting will be sold in a silent auction, the entire proceeds of which will benefit annual support of arts education at Harlem Village Academies.

“Starting to expose myself to art led me to change how I related to music, and how I thought about music.” -Majical Cloudz

Nate Lowman was born in 1979 in Las Vegas, NV and now lives and works in New York City. Mr. Lowman first gained critical attention when his works were included in the Museum of Modern Art/PS1 show Greater New York (2005). His solo exhibitions include the Brant Foundation, Greenwich, CT (2012), The American Academy, Rome (2011), and Astrup Fearnley, Oslo (2009) among others. He has participated in dozens of group shows including The Serpentine Gallery, The New Museum, The Guggenheim, and Palais de Tokyo. He is currently exhibiting his fourth solo show at the Maccarone Gallery in New York City, titled Rave the Rainforest.

Majical Cloudz is the name chosen by Canadian electronic sound artists Devon Welsh and Matthew Otto. Their performances are deeply expressive — strong vocals that sit and live on top of washes of white noise, filtered synths and sparse thuds. Their songs are intensely lyrical, oriented around themes of patience, family and desire. Their live shows celebrate the joys and value of a shared musical experience.

“Starting to expose myself to art led me to change how I related to music, and how I thought about music.” -Majical Cloudz 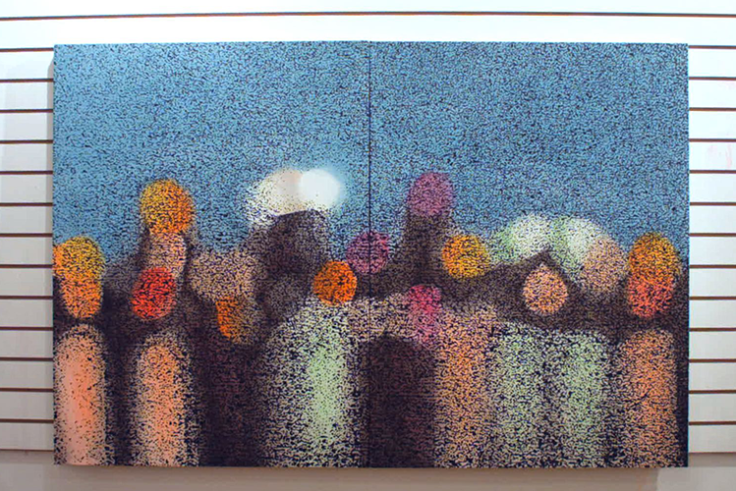