Ever wonder what it would take to be James Bond, Jason Bourne or another notorious spy? SPYSCAPE, a recently opened experiential museum in New York, provides the answer by giving attendees the opportunity to enter the world of special agents, covert operations and secret missions.

Created by Adjaye Associates, SPYSCAPE is deceptive from the outside, appearing like any conventional Midtown Manhattan office building. But, a step inside its darkened doors reveals a futuristic and imposing interior with deep grey cement walls, polished black floors and a breathtakingly high ceiling. Even the museum’s lobby recalls the sleek architecture and shadowy color palate of intelligence agencies and top-secret headquarters.

The intrigue builds from there as viewers move through the museum. Fitted with a unique identity band that records each visitor’s performance in four Spy Challenges and personality tests prompted at minimalistic question stations, viewers are led into an enormous elevator. This seemingly innocuous elevator transforms, as the doors close, into a dizzying immersive video installation. Developed by the same studio that created the visual effects for films like Ex-Machina and Blade Runner 2049, the video not only briefs incoming spies on how to maneuver through SPYSCAPE, but also narrates a short history of spying, culminating in the most prevalent form of surveillance today–our smartphones. 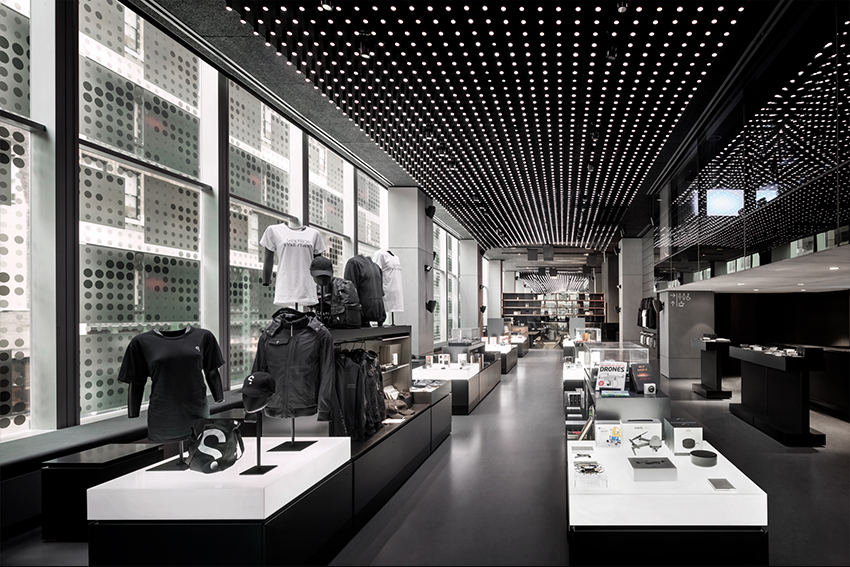 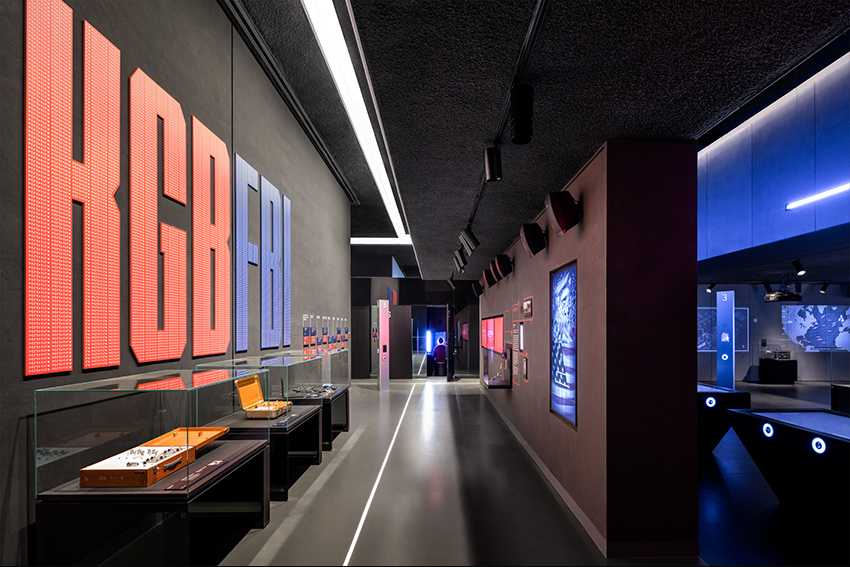 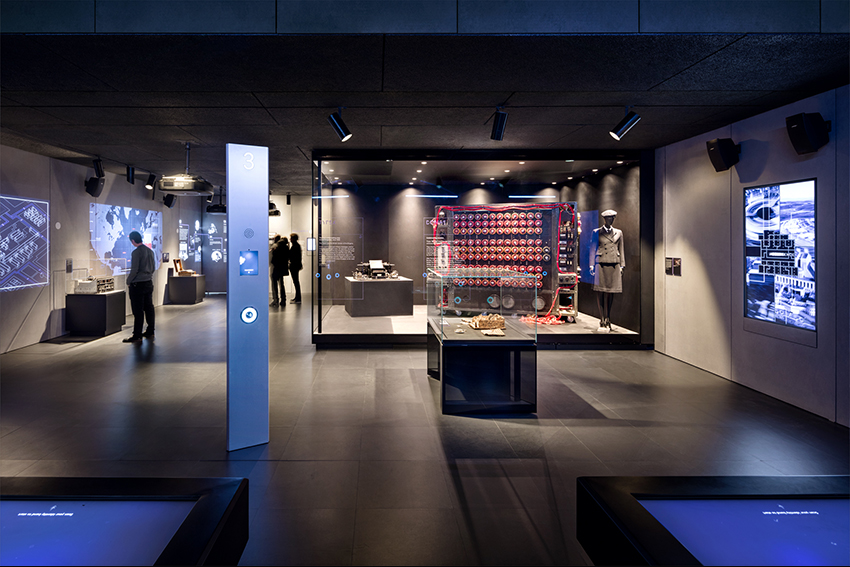 The museum further engages visitors with a series of interactive Spy Challenges that range from decoding and sending covert messages behind enemy lines to maneuvering through a 444444-style laser obstacle course. Reflective of the entire museum, these challenges are created with cutting-edge technology as seen in the Deception Challenge. Held in individualized interrogation rooms, the challenge uses innovative facial recognition technology and pulse monitors to test participants’ capacity to scam their way through a lie detector test.

Perhaps the most stunning challenge in SPYSCAPE is located inside a giant weathered steel drum. Pulling back the curtain from its rusted exterior, viewers confront screen after screen of live and prerecorded CCTV footage of parking lots, restaurants, and shops projected 360-degrees around the circular space. Putting on a headset at one of the numerous audio stations, viewers join a difficult surveillance operation, observing actions occurring simultaneously in the surrounding footage.

Corresponding to the interactive elements, the carefully curated design of SPYSCAPE heightens the immersive experience. In particular, the sound projections, created by composer and sound designer Nick Ryan, that occur throughout the museum add to its mystery. These sonic elements juxtapose ambient and ominous soundscapes with recognizable thematic noises for each specific room. For example, the Encryption room is filled with the clatter of code-breaking keys.

As a whole, SPYSCAPE is a completely multisensory environment. It’s also one that viewers can take with them. Before leaving the museum, viewers swipe their identity bands on hi-tech video monitors in the Debriefing room to learn their individualized spy profile and role based on their performance in the challenges. Developed by a former Head of Training at British Intelligence, these roles include Hacker, Intelligence Operative, Spycatcher and more (We got Spymaster). If viewers want a more in-depth analysis of their personalized spy profile a detailed copy can be emailed to help on a future mission–should you choose to accept it.

Photography by Scott Frances for SPYSCAPE 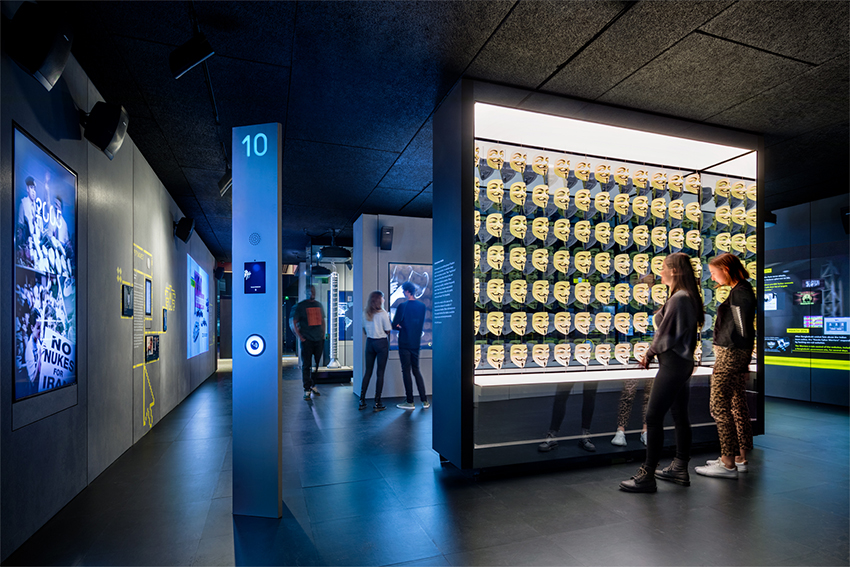 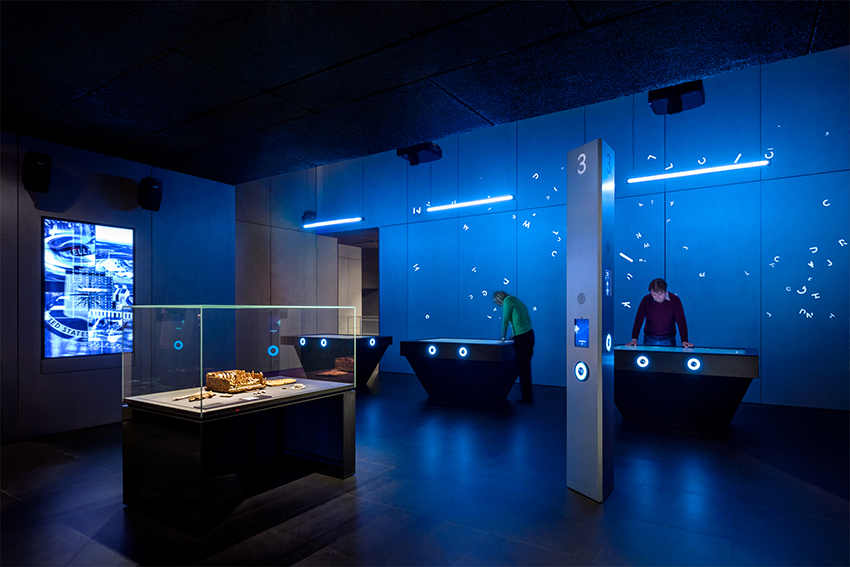 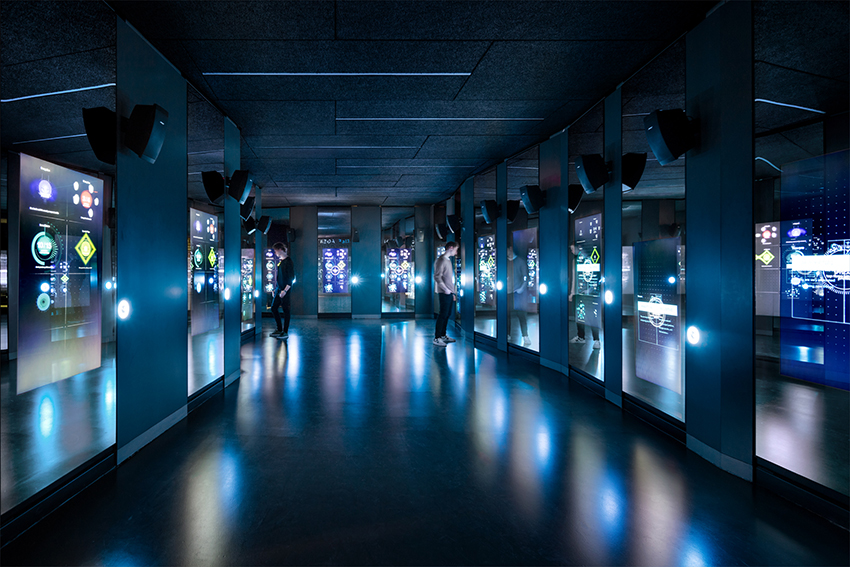 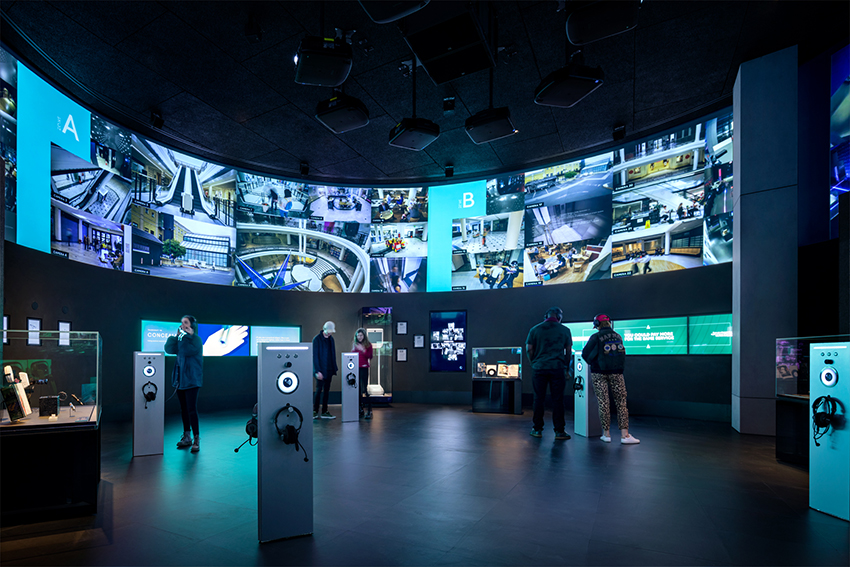